“We do not yet know what a sonic body can do.” -Steve Goodman

In a collection of notes entitled The 1914 Box, Marcel Duchamp said that “one can look at seeing; one can’t hear hearing.” (Bloch 1974) Working within a lineage that includes Cage, Schaeffer Lucier, and other artists, Jacob Kirkegaard’s 2008 sound installation Labyrinthitis articulates a response to Duchamp’s claim, demonstrating through the phenomenon of distortion product otoacoustic emissions (DPOAE) that one can in fact ‘hear hearing.’ Further, in articulating the space of human hearing, and ‘playing’ the human ear “just like an acoustic instrument,” (Kirkegaard 2008) Labyrinthitis questions the canonical notion of hearing as a passive process, a “one-way route of transduction,” (Kahn 2008) and grounds the semioticity of listening as distinguished from hearing in a materialist approach which eschews representation, using sound not as symbol but as intervention (Lindblom 2010). In this sense the work is firmly grounded in the tradition of site-specific sound art, creating a discourse space in which technology and the body, artist and audience, exist not on opposite sides of dichotomies but on a continuum. 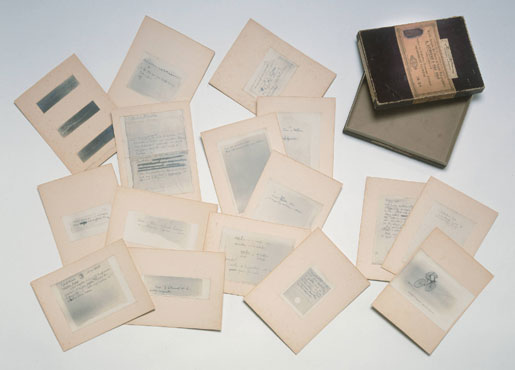 `What did Duchamp mean by “looking at seeing?” He meant to describe “the particular interpretative effect which accompanies optical illusions.” (Betancourt 2003) For example, in the Rotoreliefs, the contrast between a static disc and a moving disc creates a visual oscillation, allowing us to ‘look’ at the mechanism of seeing and understand a number of constraints: that the illusion is only possible for us when the relief is in motion; and that when the relief is in motion, we cannot distinguish the two discs— we can only see them as one (ibid.).With the knowledge that there are in fact two discs but that, when the oscillation occurs, we apprehend them as one, we can infer that the configurational relationship between the two activated discs causes the limits of our perception to ‘synthesize’ a new image entirely from our perceptual processes: in this way we can ‘look at seeing.’ (Ehrenzweig, 24)

Then we can begin to interpret the phenomenon, as Betancourt states. This also allows for a new, non-teleological artistic-perceptual structure (ibid.), and the discourse domain which this kind of art articulates is not predicated on phenomena as representations but on an exploration of the material aspects of the phenomena themselves, the ability to observe the sensory mediation of experience, and its limits. Though the groundwork had been laid by Schaeffer, Cage, and Lucier, as well as through Dianne Deutsch‘s discovery of the octave illusion in 1973, and Maryanne Amacher‘s work with otoacoustic emissions in 1999, until Kirkegaard’s Labyrinthitis, there had arguably been no sound-oriented process explicitly analogous to optical illusions which would cause one to perceive a mismatch between stimulus and receptor activity in the human ear, and there had been not been as cogent a response to the passive connotation of hearing which is so pervasive in the historical musical narrative.

In 1978, physicist David Kemp demonstrated for the first time in a scientific context the phenomenon of otoacoustic emissions (OAEs) (Kemp 1978). These are audible sounds which the inner ear itself generates, and which can either be spontaneous (SOAE) or evoked by pure tones (EOAE). Commissioned by the Medical Museion in Copenhagen, Kirkegaard’s Labyrinthitis is composed on the basis of the latter, particularly distortion product emissions (DPOAEs). In fact, similar findings were reported in the 18th century by Guiseppe Tartini, who while investigating violin double stops discovered that two simultaneously-played tones may cause a listener to perceive a third tone (Tartini 1754). Indeed, it should be noted that OAE’s are anomalous only insofar as they are audible: the the very process of hearing involves the vibration of the cochlea’s hairs when two tones enter the ear, which causes electro-chemical responses to the vibrations; in certain cases this vibration causes “movement of the connected basilar membranes,” which in turn causes the ear to emit sounds as a byproduct of hearing (Fischer 2008). Thus OAE’s could be considered ‘amplified’ instances of a generalized property of the human ear. 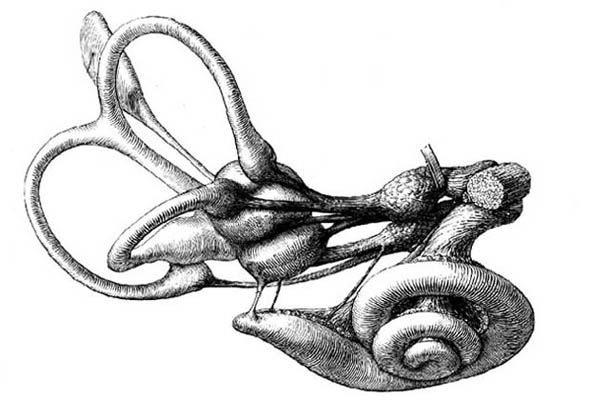 Looking to use this phenomenon as a compositional impetus, Kirkegaard inserted tiny speakers and a microphone into his left ear. The input is a pair of primary frequencies in “a ratio of 1 – 1.2,” (Kirkegaard 2007) the interaction of which causes a DPOAE in Kirkegaard’s inner ear. The microphone picks up this and other resultant DPOAEs and amplifies them enormously, outputting them to the audience as they arise. The audience will have its own DPOAE’s when confronted with Kirkegaard’s, so much so that, at a loud volume, the piece seems to turn one’s ears into a bright resonant magnet, sound buzzing ticklishly out of it, at least in my listening experience. The receivers of sound in fact become producers of sound in the act of receiving, and this creates a potentially-endless feedback loop (which actually renders compositional decisions largely arbitrary). Therefore, the piece is a musical analog to the concept of Duchamp’s Rotoreliefs, since it builds its discourse not from sound as representation but from the actual sound phenomena, and since the configuration of the pure tones, like the static and moving disc, causes a mismatch between input and receptor activity, creating a space in which the resultant phenomenon, DPOAE’s, can be explored and encoded with meaning. It is a rebuttal to Duchamp’s claim that one can’t hear hearing.