“The great painter Degas often repeated to me a very true and simple remark by Mallarmé. . . . One day he said to Mallarmé: ‘Yours is a hellish craft. I can’t manage to say what I want, and yet I’m full of ideas. . . .’ And Mallarmé answered: ‘My dear Degas, one does not make poetry with ideas, but with words’.”

Paul Valéry in “Poetry and Abstract Thought” from The Art of Poetry, which is an essay I was supposed to read in college but didn’t. It’s good though, and Valéry is using this anecdote on the way to illustrating a distinction between poetry and “purposive language” such that the latter is akin to walking to a destination while poetry, by contrast, is dancing.

I’m reading Valéry now as fodder for a conversation I’m having with my mom, in which I hope to justify Matthew Henriksen’s abstruse but beautiful book, Ordinary Sun, out now from Black Ocean. It was a valuable challenge to have Mom read these poems to me because her disinterestedness problematized the book. She’s not willing to see the poems as incommunicative but lovely because she is only interested in this “purposive language.” 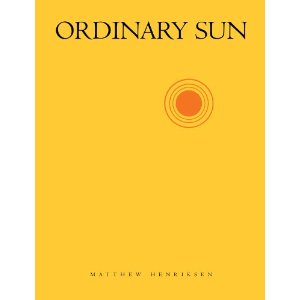 I emailed her and argued that clearly Henriksen cares about what he’s writing, “so these poems are a good place to start exploring the ineffable. Language — words on their own, without communicative meaning — is one of the essential things about being human,” and she agreed, saying that “yes, words ARE one of the essential things of being human, but it is so they do make sense/meaning with each other, in contrast to nonsense.” So take that, Henriksen. I don’t think my mom likes your book.

Which, to be fair, I can’t blame her for. The nine sections that comprise Ordinary Sun’s 108 pages are chock full of some of the most complex poems you’d only expect to find in, y’know, like, all good contemporary poetry. I mean, if Mom had read anything else in Black Ocean’s catalog I don’t think she’d be as persnickety about lines like these, in “Falling”

Holy tissue made of glass,

my tongue is a flame
you touch with your finger,

a flame I try to swallow, bitter
little bird I am, mother day.

Which, come to think of it, I don’t get either. I think it’s lovely though, and eerie and kind of like what I want heavy metal lyrics to be. The poem is finely-tuned and sensate and works for me that way, which is all I ever ask of poetry. Matthew Henriksen is extraordinarily skillful with sharp, provocative language. That’s what brings me back to the book every time, and what fuels my conversation with Mom. I want to defend Henriksen’s considered lines against the priority she ascribes to communication.

But beyond the luxuriance of something like “In a field of yes, a hole amid the asters,/a crow feels the weight of asking.//A crow feels ageless” I want to find the thing that occurs in the combination of poems, in reading the book as a whole, which allows Ordinary Sun to be meaningful. My role as a reader of this particular book is to find what happens in the interaction of the poems and their fearful images, and more importantly, what happens through the language habits that the poet creates within the environment of the book.

So, but, and — for moms who want the what, can they conclude that there isn’t more here than handily executed lyrics? Henriksen predicts the question in this interesting KUAF interview, where he describes what the book “is after, which is sort of eternity within the physical world that we live in, and the potentiality for all things to be beautiful and divine. And if you call it an angel, it’s an angel.”  I listened to that and thought, “He’s like George Bush; I have no idea what he’s talking about but I want to have a beer with him.” Which isn’t to say I don’t recognize his poetic impulse to describe eternity in the physical world, just that I don’t recognize it in his poems.

I’d capitulate Mom’s point here, then, except I think this is actually the best part of the book. Because I don’t think the physical world communicates a lot of sense, and Ordinary Sun is like life in that it’s complicated and frustrating and built on a lot of presuppositions that I don’t understand. In that way the poems embody their meaning. Henriksen has layered the images so densely, and obscured them through a recurring mention of some glass — to the point where they’re barely recognizable — and in that way created what seems to be a righteous dialectic: how can one say a thing that cannot be said?

Because check it out: eternity by definition does not inhabit the physical world we live in. There is an infinite and qualitative distinction between eternity and time, to quote Kierkegaard. Eternity within temporality doesn’t make a lick of sense within the framework we’ve constructed for sense-making, but that’s the name of the game for poetry; life is bigger than sense. Accordingly, there is a metaphysics in the weave of Ordinary Sun that indicates something behind our precarious notion of communicating ideas. I find it keenly asserted at the end of the book in “Fucked Up World.” Henriksen writes, “Pretend above all to love this thing/this monstrous idea of a room.”