There are very few things in music right now that excite me more than the words “new Alasdair Roberts record.” I became something of a Roberts evangelist last year when his album Spoils came out, and since then I’ve been availing myself of his back catalog, which includes several wonderful albums of traditional ballads and songs. His new record, Too Long in This Condition, is another collection of traditionals, and it is a delight. Sonically, it feels closer in spirit to Spoils–which was a (relatively) boisterous album of Roberts originals–than to his earlier traditionals records, in particular The Crook of My Arm, which remains (by a small margin) my favorite thing Roberts has put out to date. But there’s plenty to love about Too Long in This Condition. Highlights include marvelous takes on “The Two Sisters”, “Barbara Allen” and “The Daemon Lover”, the ecstatic jaw-harp-featuring “Kilmahog Saturday Afternoon,” and “The Golden Vanity,” this last being the record’s standout track. Also look out for “Little Sir Hugh,” which as near as I can tell is a song about Jewish blood libel–and I don’t mean “about” in the sense of “discussing” or “critiquing,” but rather in the sense of “features a Jew luring a child into her house and then murdering him for his precious blood.” Ahh, history!

END_OF_DOCUMENT_TOKEN_TO_BE_REPLACED 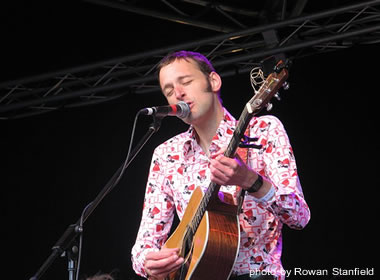 This isn’t strictly literary, but with a songwriter as smart and lore-versed as Alasdair Roberts, it’s not strictly not literary either. I really dig his new record, Spoils, and go into some detail about same over at the FLAUNT magazine blog. It’s out this week from Drag City. For the uninitiated, there are a few of his songs on his myspace, though none from Spoils. I thought Drag City was giving away a promo mp3 of a Spoils track, but I just checked for it again and can’t find it.