They’ll have a music of wet streets / and lonely bars where piano notes / follow themselves into a forest of pity and are lost.

When I was 17, I saw a man on cable television chase a green Volkswagen Beetle until he slammed headfirst into a pole. He didn’t see the pole because he almost had his hands on the car. He was almost as fast. Also as big, almost. The shot of the man falling after he runs into the pole is full of beautiful slants and heights—leafless branches, latticed tower, streak of cloud, dazed knee—that can only feel as much like winter as they do when propped on top of all that flat. Flatness of a color that might introduce itself as green, and you’re like sure, dirt, whatever you say, we already met but don’t worry about it, this time you’ll get your act together.

The shot was directed by Alison Maclean, whose cinematographer was Adam Kimmel. How they made that shot was first they read Denis Johnson’s book Jesus’ Son. I bought the book after I watched the movie to make sure it was Billy Crudup’s voice that was annoying and not the words.

In the book, the words were in sentences full of glow and ache and the proud civility of the self-fucked, the calm leak of “Excuse me, there’s a knife in my eye.” And also of course the weeping and calling bartenders your mother. They were words about clouds that looked like brains, but they were also words like “help” and “stay” and “save.” Those little words forever hitchhiking back to church and never making it all the way. Paragraphs would interrupt themselves to turn to you. I was 17 and hadn’t read Levinas or Buber, and yet here was the “you” that knew the face on the other end was always dark. Little words like “search” and “name.” Paragraphs that interrupted their description of a shriek to tell you they have gone looking everywhere. For the shriek, they mean, but mostly it’s the gone, and the looking, and the everywhere.

A voice smart enough to hear its own narcissism but still stuck at the age where it can’t believe all the things it gets to feel and hear and see to the point where it doesn’t care at all how slurry it sounds to use a word like “glorious,” a voice that slackjaws around in a sheepskin coat calling everything terrible and beautiful like Oprah’s and-you!-get-a-car-and-you!-get-a-car. Back and forth between wide arms and self-hugging and shivering the whole time and I was 17. Even though I knew the Goo Goo Dolls singing “and you bleed just to know you’re alive” was kind of stupid, it didn’t feel that way. Here was an unironic hallelujah named after a song by a band I went out and listened to because of this book. Here was a blurb from some guy named Barry Hannah, so I read him too. Hallelujah. 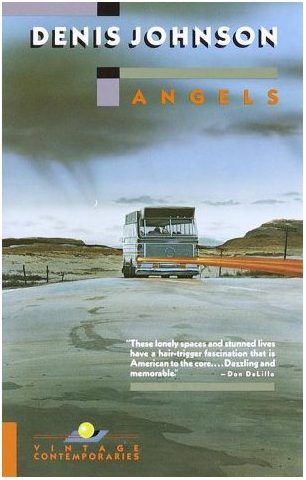 Later I would feel something hearing that Velvet Underground song in question speed up and slow down and suddenly drop in clipper ships, but I would also sort of be there knowing I was supposed to be feeling something, and I so badly wanted to feel the biggest feelings I would shake myself on purpose. Later, most of the people I would meet didn’t need to do that, and neither did I, and real feelings turned out to be just as big and dark and fucked as promised, but first I was 17.

In a dorm room, I read Angels. On a Greyhound, I got stuck in a snowstorm. But didn’t we all, and wasn’t that why we were here. When I moved to New England and said the word “Reno” as though the word by itself was spiritual, my new friends laughed. The intellectual part of my brain spun all this shit about class and the West, but the part of my brain high on Denis Johnson just kept singing the word “Reno.” Neither was all the way right. At no point was I or anyone else Denis Johnson. Like all of the gifted among us, Denis Johnson was only sometimes Denis Johnson. By which I mean the white text with the drop shadow effect. Years later, I realized that of course Billy Crudup made his voice annoying, what a smart move, what a poignant duh, but first I was 17.

And then I was 22 when I taught my first creative writing class (what a dumb idea for everybody involved) and photocopied “Car Crash While Hitchhiking” and said “Yes, drugs, right, yeah, but holyness. Guys, I get it, yeah, I know, the drugs—it’s very—right, but—the holyness isn’t because of the drugs. Wait, I mean—” and I held my chin with a sort of contemplative finger gun like I’d seen all the best teachers do— “is the holyness because of the drugs?” I was 22 and hadn’t done very many drugs and was lucky enough to not really give a shit about drugs and was whatever enough to have grown up in a town where drugs made your friend’s mom lose her teeth. So mostly when it came to drugs I deferred to a middle-class class-clown from my high school who got into Neutral Milk Hotel, and I was very surprised he also knew about Neutral Milk Hotel when I was 17—because I didn’t quite understand yet that the internet wasn’t secret—and despite my surprise I very much agreed with his MySpace rant about how “Jeff Mangum didn’t need drugs, he just sat in a closet!!!” Later it turned out that wasn’t quite true.

Denis Johnson’s three rules for writing, according to Lawrence Wright for The New Yorker, were these:

“Write naked. That means to write what you would never say.
Write in blood. As if ink is so precious you can’t waste it.
Write in exile, as if you are never going to get home again, and you have to call back every detail.”

I love all of those, especially the third one. What seems important is that the rules by themselves seem a little cartoonish, a little mosh pit, but the explanations seem like cleaning up after the mosh pit is over.

And then I read Train Dreams and didn’t read Tree of Smoke and read Nobody Move mostly looking for how many times it said the name of my hometown (Oroville) and marveled at the beginning of The Laughing Monsters with its white burp of a gaze—maybe-self-aware-maybe-not—but that’s not what I marveled at; when I say I marveled I mean the sentences about the woman whose fruit was being thrown into the bay. But I didn’t finish The Laughing Monsters. The book I finished most—maybe less times than Jesus’ Son but closer—was Already Dead. A California gothic, it says. When I heard that Henry James quote about baggy monsters, I thought “Oh, like Already Dead.” It’s ridiculous, it’s meandering, there’s Frankensteins and pot forests and characters announcing the fog and an Author’s Note that includes a PO Box where you can write to get a Course in Miracles, which includes the Text, the Workbook, and the Manual for Teachers. There was my Northern California. It was all there. The enormous silent man with dreadlocks on the sidewalks of Mendocino who walked past me twice outside the lighthouse, once when I was 10 and again when I was 24. Or at least the forest part. And the fog that takes the forest to the water.

To tell you the truth I can’t remember if I started calling it “the Lost Coast” after I read Already Dead, but if I did it was the same way your friend comes up with a nickname for a soap you’ve been eating your whole life and you immediately use it forever. Every time I meet someone from Northern California, I wait until we’ve talked through a couple different kinds of light, and then I recommend they read Already Dead. To no one else, really, do I ever recommend it. It’s one of my favorite novels. On social media yesterday and today are all these friends of mine who met Denis Johnson, in real life, next to real oceans, and Denis Johnson of course was sweet and nostalgic and gentle and a human with a heart you could go everywhere looking for. As Jeff Parker said on social media, his family fills our thoughts.

Because at the end of the day, Denis Johnson wrote Jesus’ Son for money, he said. Some sketches to sell to The New Yorker, he said. The real Denis Johnson wrote lots of other poems and stories and essays and novels, and now we are here to gather and talk about our favorites. People who knew him for real will talk about these words, and they will talk with each other about other words he spoke only to them. He wept all the time, his friends and students say. At the idea of untying a knot from your shoelaces, Kelly Luce said. He looked for an AA chapter in Russia. He was the real deal, which makes me think that maybe I’m completely wrong about the 17 stuff. It makes me remember some volcanoes never cool off. The story at the end goes “He was completely and openly a mess. Meanwhile the rest of us go on trying to fool each other.”

In this wounded light I nonetheless can’t help but go “damn, nice job dude,” when I read James Yeh at VICE. Or I read Gene Kwak’s beautiful new story at Paper Darts that probably owes a little to Denis Johnson, but owing doesn’t work that way and I still say “damn, damn, damn.” Little words like “damn” and “job” and “nice”—I feel stupid but can’t help it. We discover that our friends have favorite lines and poems we’ve never seen before. A poem with the word sadness over and over, and the surprise to see who loves it. Oh, we say. You were also 17. So am I. We still are.

I know there are all kinds of weeping, and some are more selfish than others, and the world is complicated to the edge of endless cruelty. Winter is not flat everywhere. There are words that will never meet each other. But I have a book next to me that says Ghost Towns & Mining Camps of California, and thinking today about beauty and wonder and Denis Johnson, I see all those little words on fire. Ghost and town and mining and camp and California. Excuse me, there’s a knife in my eye.