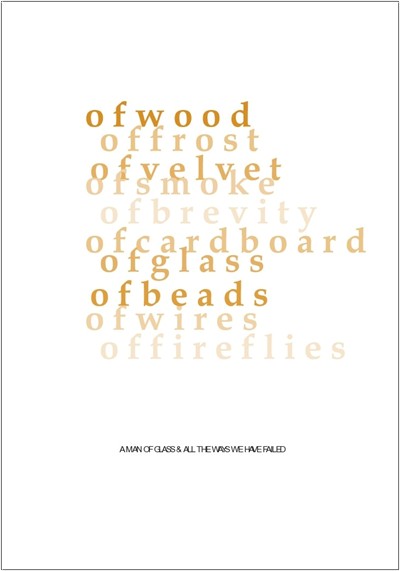 This is a man being so much other than.

How the love falls out of him, replaced by beads, by water, by nails, by cardboard.

Bent on a curb, blowing kisses to dead lips in that window above, a voice calling out a name, her not looking down at the wreckage.

A man when there is none left.

This is a love poem, a love poem that doesn’t want to be, a love poem about shattering open, about groping for what is left when there is nothing left, when subsistence isn’t enough, when we are damaged and the memories of what was, are all that is.

To celebrate Valentine’s Day & the forthcoming publication of J.A. Tyler’s second book, A Man of Glass & All the Ways We Have Failed (now available for pre-order from Fugue State Press) publisher James Chapman has kindly offered to give away a free advanced copy of the book to one lucky HTMLGIANT reader who shares their shittiest love story in the comment thread to this post. The contest is open between now and Valentine’s day. On the 14th, J.A. Tyler will select the winning comment/story.