Crushed & Filled with All

“I’ve dipped a stranger’s sores in my fat; they require brute force because I love them.” — Sean Kilpatrick

Here is the scene: episode three, season four, Breaking Bad. Jesse Pinkman pulls up to his house, gets out of his little red Toyota Tercel, and walks up to the front door. Exterior. Night. White guy with dreadlocks exits Jesse’s house carrying a red toaster oven. “Check it out,” the dreadlocked white guy says to Jesse, “score, yo!”

Preceding this scene, another scene, the two scenes form a sequence bridged by Fever Ray’s “If I Had A Heart.”

First, Jesse driving a go cart, speeding around an empty track. He had asked Walter to accompany him, but Walter declined. Jump cuts: going left, going right. Notice Jesse is wearing a helmet. He screams.

So much of Jesse’s character is built on the island of avoidance. A bulwark against feeling and remembering. Such a perfect imago of Nietzsche’s chilling hypothesis that “the past must be forgotten if it is not to become the gravedigger of the present.” Time and time again, Jesse’s character experiences pain and loss and setback because of previous pain and loss and setback. Like an Ouroboros, he feeds his misery with misery, and finds himself ever looping through the same trap. The go cart makes explicit the implicit: spinning wheels, going in circles, getting nowhere, producing nothing, always victim to the ephemeral, and invariably alone.

“They pressed upon his brain
as upon his lips as though they
were the vehicle of a vague speech;
and between them he felt an unknown
and timid pressure, darker than the
swoon of sin, softer than sound or odour.”
— William Walsh

A strange POV shot from inside a car across the street from his house, which implies that someone is watching him.

“Prostitutional ontology, materially captured by the bloody, short-circuiting apparatuses of capitalism, can only be cited by philosophy, acted out, at the risk of unbinding the whole of philosophical discourse itself.”
— Vincent W.J. van Gerven Oei

I found a youtube clip of the scene. The title of the clip is “Jesse’s Den.”

Interior. A speed freak scrawls on the wall, another takes a hit from a pipe. Two people fuck on the floor, a woman underneath a man, the woman scrapes her fingers across the man’s back, ripping his flesh in streaks. Bugged out people roam around, a mosh pit, someone punches an already bloodied wall. The atmosphere is chaotic, reminiscent of those final lines in Shakespeare’s Sonnet 147:

And frantic mad with evermore unrest;
My thoughts and my discourse as madmen’s are,
At random from the truth vainly expressed:
For I have sworn thee fair, and thought thee bright,
Who art as black as hell, as dark as night.

Not exactly zombie-like, these people behave as if they were inside a cliched representation of an insane asylum: muttering to themselves, wandering aimlessly, scratching furiously at imaginary bugs. Jesse steps inside, moves to the couch, picks up a pizza box and tosses it aside, sits down, lights a cigarette, and bobs his head. Even here amongst all these people, he is utterly alone. Always, Jesse finds himself alone. There is no such thing as companionship for Jesse, unless we count his relationship with Walt. His two friends, Skinny and Badger, are fair-weather at best. A woman wobbles, wrapped in plastic, you can see her behind a group of moshers holding forties.

“We’ll tell you
what a corpse is.

with her shoes
on backward.

Here is the clip:

More than anything, Jesse desires the impossible, wants what he cannot explain, yearns to scratch an itch just out of range. He has money, a home, a car, freedom, but it does not satisfy him. He cannot be satisfied, which is perhaps why he is such an interesting character.

“Even if by then, we understood: there was no magic that could save her from the world outside of ours.” — Amber Sparks

Chemistry is magic. Walt and Jesse perform magic in their lab below the chicken distribution center. But even magic cannot quench Jesse’s thirst.

“Wearing a wig of snakes
I’ve turned the reef
of her limbs from a sponge
into granite, tragedying desire
in a last act of blood,
incanted – dehumaned.”

It seems, Jesse’s eyes are puffy and red regardless of whether or not he is high or not high. His body has been beaten and threatened and abused by himself and others. His family has abandoned him. The woman he loved died in bed with him. He has murdered and disposed of murdered bodies. Incanted, dehumaned. Jesse is not the magician, really. Walt is the magician. More accurately, Jesse is the magician’s assistant.

Afflicted by the gravedigger of the present.

I am reminded of Andres Serrano, the artist who photographed a series of dead bodies, and something he said which seems to resonate. He said, “The morgue is a secret temple where few people are allowed. Paradoxically, we will all be let in one day. I think you’re upset and confused that I’ve brought you there prematurely. My intention is only to take you to this sacred place. The rest is entirely up to you.” 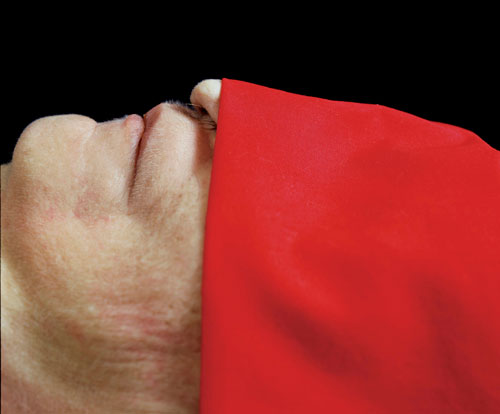