MINOR: Stories and Stories II were published by Six Gallery Press, an indie with some street cred. Their follow-up, Stories V!, is published by Holler Presents, which is the same umbrella under which you offer 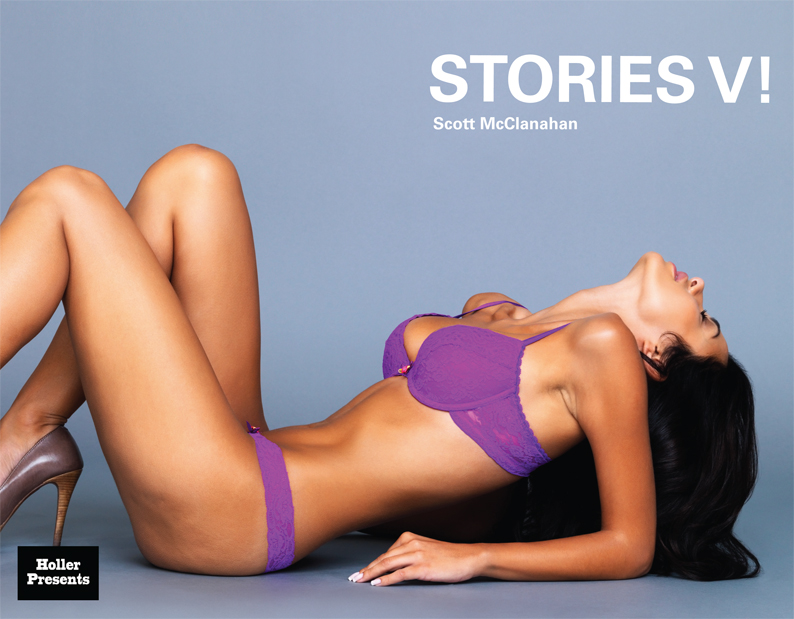 the videos you direct, such as (my favorite) Preacher Man. In the video realm, of course, it’s a badge of honor to be able to produce your own stuff, but there’s still that lingering stigma (maybe this is changing) against self-published books. I know you well enough to know you take your writing career more seriously than any ten writers I know. So I’m interested: why this choice, to self-publish this book?

McCLANAHAN: Actually, I don’t think I take it that serious really. There is a part of me that does, but I guess I understand in the end that money’s just something you throw off the back of a train.

I’m sure if I took it serious I would have done something that made more sense. I would have signed with an agent, written ONE book of short stories, a sensitive coming of age novel, and that silly non-fiction book about hip-hop or why I’m a vegan. Either that or I would have worked as a male stripper for a year and then written a memoir about it. I don’t think strippers and book deals should mix by the way.

I guess I’ve just decided to go this route because of time and desperation. The respected publisher/ respected indie lit publisher route feels so loooooooooooonnngg. It would be like saying to your significant other, okay I love the way you look in those sweatpants, but we will not consummate this relationship until October 2015. On top of that we’re going to give you a cover that either looks like diarrhea or some line drawing created by a first year art student. Then in 2015 this happens, “We regret to inform you that the press has gone belly up and will not be releasing your novel entitled (insert title here).”

I only have so many days Mr. Minor, and time is ticking away. It’s an Otis Redding thing.

MINOR: Math-wise, I was expecting Stories III to follow Stories and Stories II. Instead, we get Stories V! (with that exclamation point, no less.) What’s significant about the V?

McCLANAHAN: Actually Stories III and IV exist, and we were going to do a GNR Use Your Illusions I and II type release, but the state came in and shut us down. The state just busted in one morning and told us we had to close up shop, put the tape around the house, and confiscated the manuscripts. Sad really.

Thankfully, we were able to get a picture of the one person who read the books before they took them, and we decided to put that person on the cover.

MINOR: The book develops in a hybridized manner. Some of the stories are stories that can stand alone, but some of the stories seem less like stories and more like pieces of an ongoing conversation the book is having with the reader. How do you think about the stories, their relationship to the book, the form of the book, and the overall project?

McCLANAHAN: One of my favorite books is the diary of Samuel Pepys. There are tons of beautiful things in it like he catches his wife kissing a French dude. He invites his boss over to dinner and serves him fish, only to realize in the middle of the meal that the fish is full of worms. His boss tells him it doesn’t matter and keeps eating.

There’s an immediacy to just a human voice speaking to you that is refreshing. That book is from the middle of the 17th century and Pepys still travels through time and space with that voice. Think of what we would have lost if Pepys’ culture told him he had to be working on yet another novel. I feel the same way with Gide or the Susan Sontag journals that came out a year or so ago. I want to shout, “Stop working on your novel, Susan. This is amazing. Your art form is right in front of your face and you can’t see it.”

McCLANAHAN: He’s the same guy. I got attacked by a friends’ monkey last year, and even had to go to the doctor because he poked me in the eye. People thought I was just making this story up, but it happened. Probably, if was I telling the truth, about 75% of the stuff I write about is just stuff that happened to me. Of course, what’s different with me is I try to live my life like a fiction. You don’t have to imagine or make up, if you’re living your life like a character in a book. I’m want to be Oliver Twist.

I figure if you’re not getting attacked by monkeys at least once a year, then you should probably think about getting out of this writing business.

Beyond that, I may have dodged this question because I’m not sure what meta means. It’s the same thing with a novel. I have no clue what it is. I’m never able to participate in those, “IS THE NOVEL DEAD?” discussions because I don’t know what a novel is in the first place. If anyone could explain, it would be appreciated. scottmcclanahan@hotmail.com

I wonder if Villon thought about the meta thing though.

MINOR: You often tour and read with good writers whose project is a kind of willful avoiding of interiority, and which seems rather self-protective in its unwillingness to take positions on things. There is a flatness to that kind of now-very-popular prose which seems in many ways to be the opposite of the aesthetic you’re chasing here, which seems to take up the side of utmost vulnerability. When you think of your work, do you think of it on these terms? What is it that you are trying to accomplish with your stories? Do you mean to offer the reader a particular type of experience, or do you think of the reader at all? You must, is what I think, since you even address the reader directly in the book.

McCLANAHAN: Yeah, I think there’s something really phony about saying you don’t want to create something within the reader or you could care less about issues of politics, Frisbees, whatever. I’m from a state where people die every week so that you can check your e-mail. The outside world exists.

I don’t know how many conversations I’ve had with people over the past couple of weeks going on about the dangers of nuclear power. I want to say, “Do you know how many coal miners across the globe have died in the past sixty years?”

Now, do I want to write about that? Of course not, but is it part of my world? Of course it is.

I’m just saying that people are alive. I’m just saying, “I exist. Do you exist? Isn’t life fucking miserable sometimes, but isn’t it fucking great to be alive sometimes too?”

I know existing doesn’t create a sense of obligation in anyone, but I’m just afraid we’re going to lose our capacity for joy if we’re not careful. We are the Pill Generation. Who wants to be against JOY? I don’t. Some folks just want to talk you to death.

I even have directions to my house in the new book. Come on over, I’ll cook you a steak or a veggie burger.

Of course, these directions to my house could bring an assassin, but it could also bring a great friend I have yet to meet. I have an Iranian father in law and he’s not scared of the world. It seems like only Americans are scared to go outside unless they’re carrying a machine gun.

MINOR: What now? This book ends with a Farewell, which says, among other things, that you’re done with Stories. Does this mean you’re soon to bring us Novel, Novel II, Novel V!?

McCLANAHAN: Yeah, this is the final book of stories. I’m putting out a novel with Gian’s Tyrant Books in spring 2012. I’m really excited about that. Hill William.

I also have a scrap-book novel called Crapalachia. It’s going to have recipes in it too. Pretty much everything. Any publisher out there interested?

I’m also in the beginning stages of working on a weird little book called The Nightmares. It’s a record of all my hallucinations, nightmares, daymares, and panic fantasies that I’ve recorded over the past couple of years (I still need to type up some stuff and send it to the editor though). It’s like a Nerval type of thing.

MINOR: You’ve been building your audience the slow and old-fashioned way, reading by reading, reader by reader. Do you have any plans to do any of the sorts of things writers do when they’ve been very successful in attracting the outer reaches of the readership independent literature allows, and now they’re ready to find ways to reach new readers? Or are you happy enough to continue engaging with the readers who already enjoy your work?

McCLANAHAN: No, I think there is an audience out there. I think there’s a big ass audience out there, if you go after them. It’s the Black Flag idea. The book or the record is just an excuse to go and play for people. Music, theater, film, performance art—these are just parts of a new literary experience waiting to happen. It’s going to happen on your computer, yes, but it’s also going to happen in the flesh, in front of your face. We just need to charge 10 bucks at the door, and find our new hybrid artists who can pull it off. We’ll need a Pasolini, or a Cocteau, a shape-shifter if you will (with maybe a little Jagger thrown in).

Some folks are already starting to do it—that’s for sure.