Welcome to the fourth installment of my new series: Reading Comics. I’m excited to report that I’ve got a bunch of great contributors lined up, and am myself working on a few entries. If you haven’t contacted me yet, but would like to participate, email me and let me know! Without further ado….here’s Peter Tieryas Liu…

100 Bullets are 100 issues packed with graphic brutality, tales of moral compunction, and the evolution of noir into a merging of both crime fiction and pseudo-history. Every gunshot exposes frailties in the cracks of a society pining for justice. The premise of the comic goes something like this. You’re the victim of an unforgivably heinous crime. Down on your luck, the mysterious Agent Graves informs you that the cause of all your suffering is Person X. He offers you an attaché case filled with a gun and 100 untraceable bullets that you can use in any way you want without legal repercussions. What would you do?

The hagiography is, on the surface, uninspiring. There’s Dizzy Cordova, locked in the slammer, her husband and child killed in a drive-by shooting. She learns from Graves that her family was murdered by two crooked cops. Skip ahead to Lilly Roach, a waitress at one of those classic 50’s café’s with pies to kill for. On the day of her daughter’s birthday, she finds out her run-away daughter turned to prostitution and died a gruesome death in an all-night porno theater. There’s Cole Burns who works the ice cream truck and you can almost hear the monotonous carnival melody repeating over and over. His grandmother’s nursing home was burned down in an insurance scam by a racketeer he works for.

It’s the normalcy of the characters that makes the stories so compelling. Dizzy is, understandably, suspicious and wary of any authority figure. Cole actually reveals the plot to his racketeer boss so he can display his loyalty and curry favor. Another character, Mr. Branch, is a skeptic, insisting on testing the gun. He goes to the middle of a public park and shoots a dog dead. The police come, investigate, and return the gun like nothing happened, freaking Branch out even more. In another story, a man who has been the victim of a millionaire’s prank that destroyed his life, gives up the gun in exchange for a new beginning. No two bullets land in the same corpse.

An autopsy would suggest traces of a contemporary Dante, Marlowe, and Milton intermixed. If they had a threesome that resulted in an unholy conception, their child would look something like 100 Bullets. At stake isn’t debauchery, epiphany, or even glory. It’s a gnawing sense of absolution and remorse that haunts those who’ve opted to wield the bullets to render their vengeance. These characters have a journey through hell in which there is no redemption or grander meaning. In that sense, 100 Bullets is more of an ‘anti-comic’ where the superhero is dead and in their place are one-hundred (actually, fewer, as there are arcs) origin stories. As initiator, we have the Mephistopheles character, Agent Graves, who isn’t interested so much in the soul as he is in will that drives each individual through their different paths. And like Dante’s Inferno, the ride through ‘hell’ is a fascinating mix of conspiracy and fantasy that elevates both into the realm of something more than a typical crime noir tale.

In uncovering the story behind the carte blanche bullets, writer Brian Azzarello weaves a history that reveals the machinations of an all-empowered ‘Trust’ and their destructive executioners, the ‘Minutemen.’ I don’t want to give away too many of the plot details, but there’s some jolting twists that make for a brilliantly assembled weapons cache of a narrative. Betrayal is rife with political intrigue that would make Gordian’s knot simple in perspective. Or perhaps a Rubik’s cube is a better analogy. 100 Bullets, unlike another brilliant classic of comic noir, Sin City, is in color. Muted color from colorist Grant Goleash with the rusticated hues of a downtrodden suburbia that has long ago barfed out the vibrancy of the golden age of comics. Artist Eduardo Risso draws with characters that jibe and swagger through their misbegotten lives. Sexuality and obesity never looked so defiant. Agent Graves and his fallen angels exude aura’s both celestial and demonic. A slight groove in the brows, accented wrinkles, tense eyes- the music is in the strokes of Risso’s brush- almost no two characters ‘feel’ alike. Note, I say feel, not look. They each rage in a hundred permutations of rage, and every degree of anger is present. Suffering is, perhaps, the only real individuality they have left. Surprisingly, Azzarello gives us noir without caption boxed narration to set the mood. Perhaps the absence of a Mickey Spillane-like narrator droning about the travails of a damned existence would be noticeable if it wasn’t for the gritty dialogue. You ever see a downed electric pole where the wires are crackling? The dialogue in 100 Bullets are like those sparks. The characters curse, spit, and hurtle language in colloquial rhythms, unpolluted by the normalcy of standardized TV speak. Graves might be the fuel, but he never wrests the wheel from any of the local drivers, each taking the readers for a wild spin.

Over the years, I’ve tried to share the comic with as many readers as I can. Curiously, almost every time I’ve described the idea behind 100 Bullets to a friend or colleague, they’ve asked, “What would you do if something like that happened to you?”

It’s a disturbing question to ponder. You don’t need me to tell you the horrors of the real world. Every time I browse on CNN or Yahoo news and read about another shooting, I cringe, wondering if I should wear a bulletproof vest whenever I go out. I’ve read that almost 17,000 people die from drunk driving crashes each year. A recent trip to the gun range introduced me to a father who was preparing his two young sons for Armageddon with weekly rifle lessons just in case ‘things get out of control,’ especially with the state of the economy and skyrocketing unemployment. 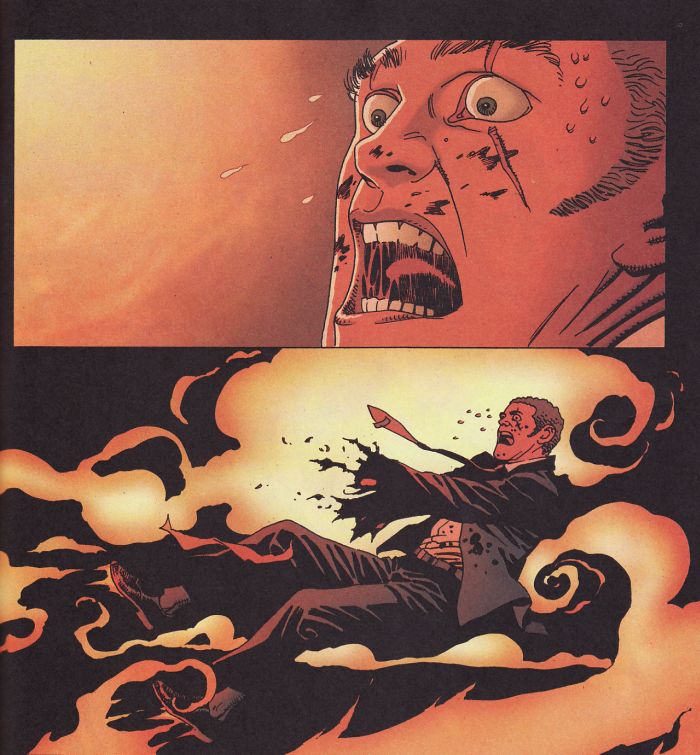 People look for answers, or escape, wherever they can. And, no surprise, the problem of suffering and vengeance has been tackled by literature and the arts since antiquity. Jump back to the Biblical Job who loses everything and tries to make sense of it in a fierce philosophical debate that culminates in a confrontation with God. Aeneas, in Virgil’s Aeneid, ruthlessly shreds his enemy to pieces in vengeance for his friend’s death (the violence of the language in the final chapter still haunts me thousands of years later). In the Chinese epic, Romance of the Three Kingdoms, the Emperor Liu Bei nearly loses his empire trying to gain revenge for his brother, Guan Yu. The Count of Monte Cristo is probably the most satisfying of the bunch with an elegance that puts it pat in the cliché of a Hollywood formula, though it’s still a damn good read.

100 Bullets drips a uniquely ‘America solution’ through its canvas of 13 graphic novels. Even the father and son tale in volume 3, Hang Up on the Hang Low (which happens to be a 2001 Eisner Award Winner) warps the traditional in favor of a doomed game of catch. After finishing the final page, I’ll never think about pool with a beautiful woman in the same way again.

The characters in the know mockingly refer to the opportunity given by Graves as ‘the game.’ But Graves insists it’s never a game, instead a test and road to ‘self-enlightenment,’ if you will. Of course, the discovery assumes you’re not on the receiving end of the bullet. Graves makes the observation, everyone has done something unforgivable at one time or another.

Who really is Agent Graves? Answers are less forthcoming on this point as the specter of a massacre in Atlantic City comes into focus throughout the tale. But perplexing questions prevail to the very last issue, especially the most important one that acts as the crux to hold everything together:

What would you do?

Peter Tieryas Liu likes to scour comic book stores with his wife for obscure comics that have mostly been forgotten. He still cherishes his Daredevil #181 as one of his favorite stories/comics of all time. Some of his musings have been published or forthcoming in anderbo.com, Evergreen Review, Fjords Review, Indiana Review, and Pank’s “This Modern Writer.” You can also find him at tieryas.wordpress.com.