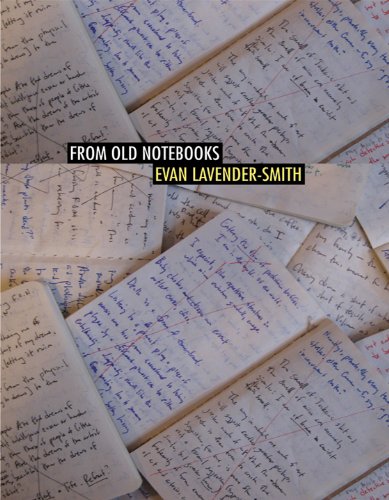 “In a certain respect, [From Old Notebooks] represents little more than the garbage can of my imagination.” (pg. 75)

One afternoon I checked my facebook page and saw in the news feed thing a post by Evan Lavender-Smith, which included blurbs for his book From Old Notebooks. What struck me about the post was that instead of the blurbs being from other “creative” writers, they were from literary critics, and not just any literary critics, but some of the biggest names in Deleuze Studies: Claire Colebrook and Ian Buchanan, to name only two. Knowing nothing else about it, I automatically wanted to purchase the book and read it.

First, the obvious stuff. This book is a quintessential example of post-genre literature: it defies genre classification. It is fiction, nonfiction, poetry, theory, anecdote, aphorism, and probably a bit of whatever other thing you can think of. There is no plot. There are no scenes. It is, quite literally, a collection of notes. Most are only a couple lines long. None are longer than a page. It is exhilarating and stirring and compelling and engaging and fascinating at every turn.

Imagine a cinematheque in which one film plays 24 hours a day, 7 days a week, without repeating—as if the film was a projection of a life, but the life would not be a mundane reality show type of life, it would be a carefully assembled life composed of the choicest bits. And imagine that you could walk into the theater at any point and sit down and watch the film for a few hours and then get up and go home and do whatever it is you do at home. You would always enter in the middle and exit in the middle. There would be no beginning, no ending, no set up and no closure. There would be little by way of context, except what you bring to the experience. This is one way to think about Evan Lavender-Smith’s From Old Notebooks (F.O.N.).

Another way to think about F.O.N. is to consider it in relation to David Markson’s Author Tetralogy because of the obvious influence (the form in particular, but also the death obsession). One of the many things I admire about F.O.N. is that Lavender-Smith clearly acknowledges the Markson connections, “[The books in Markson’s Author Tetralogy] are like porn for English majors” (pg. 60). He isn’t trying to deny the connections, and he isn’t trying to be cute or clever. Neither is he trying to mimic Markson or repeat what Markson has created. Instead, he is very clearly attempting to build off of the Marksonian foundation, which is one of the (many) things that makes F.O.N. so bloody exciting! It is an experiment in evolving a form. And to be blunt, I think the experiment succeeds.

How does it succeed? What is it doing differently to elaborate on Markson’s project? Well, for one thing it incorporates more personal information, more autobiography than Markson is willing or interested in sharing. I get the sense that Lavender-Smith really wants to uncover himself, shed secrets, bare himself, confess, and reveal what should not or cannot be revealed. This interpretation could of course be way off base. One could surely argue that what Lavender-Smith presents as personal information is in fact made up, fiction, etcetera. But even so, the very fact that he includes so much information about his wife and children (even if it’s fictitious) is in stark contrast to Markson’s project, which is aimed more at constructing a writer persona through assembling anecdotes rather than juxtaposing anecdotes with personal information to reveal a constructed writer.

Another way in which F.O.N. differs from Markson’s project is that it incorporates ideas for potential works of fiction or poetry, such as the opening lines: “Short story about a church on the ocean floor. Congregation in scuba gear.” These are a real pleasure to read: very interesting and provocative and inspiring, and on a philosophical level they work as a unique porthole into the mind of the writer. They allow us to see a character (presumably the author) at his most interesting: using his imagination.

The last thing I want to point out about how F.O.N. differs from Markson’s project—keeping in mind that there are probably many other differences that I haven’t mentioned here—is movement. I noticed about fifty pages from the end of F.O.N. that Lavender-Smith began circling around the fact that the book would soon be coming to an end. As I advanced toward that ending, the notes on endings (building upon the recursive theme of death as an ending) began to pile up and reverberate at a steady pace. I thought it was really cool the way he was able to push the acceleration of the text simply by the placement of the notes and the repetition of certain themes.  This isn’t necessarily something I’ve noticed Markson doing — he seems to be more interested in creating brilliant concentric circles, rather than playing with speed and slowness the way Lavender-Smith does.

Speaking of themes, what are the themes in F.O.N.? Family, death, drugs, sex, philosophy, football, fear, aging, parenthood, being a writer, being a teacher, being an American, being a brother, being a thinker, being vulnerable, being strong, and maybe above all being curious.  It is certainly an ontological text: a text deeply concerned with being, in all its various guises.

I could write so much more about this fantastic book, but I’ve got obligations to attend to so I’ll end with this: when December rolls around and those end of the year lists begin to appear, you can be sure that this book will be on my best books of 2010 list. Order it now from BlazeVOX