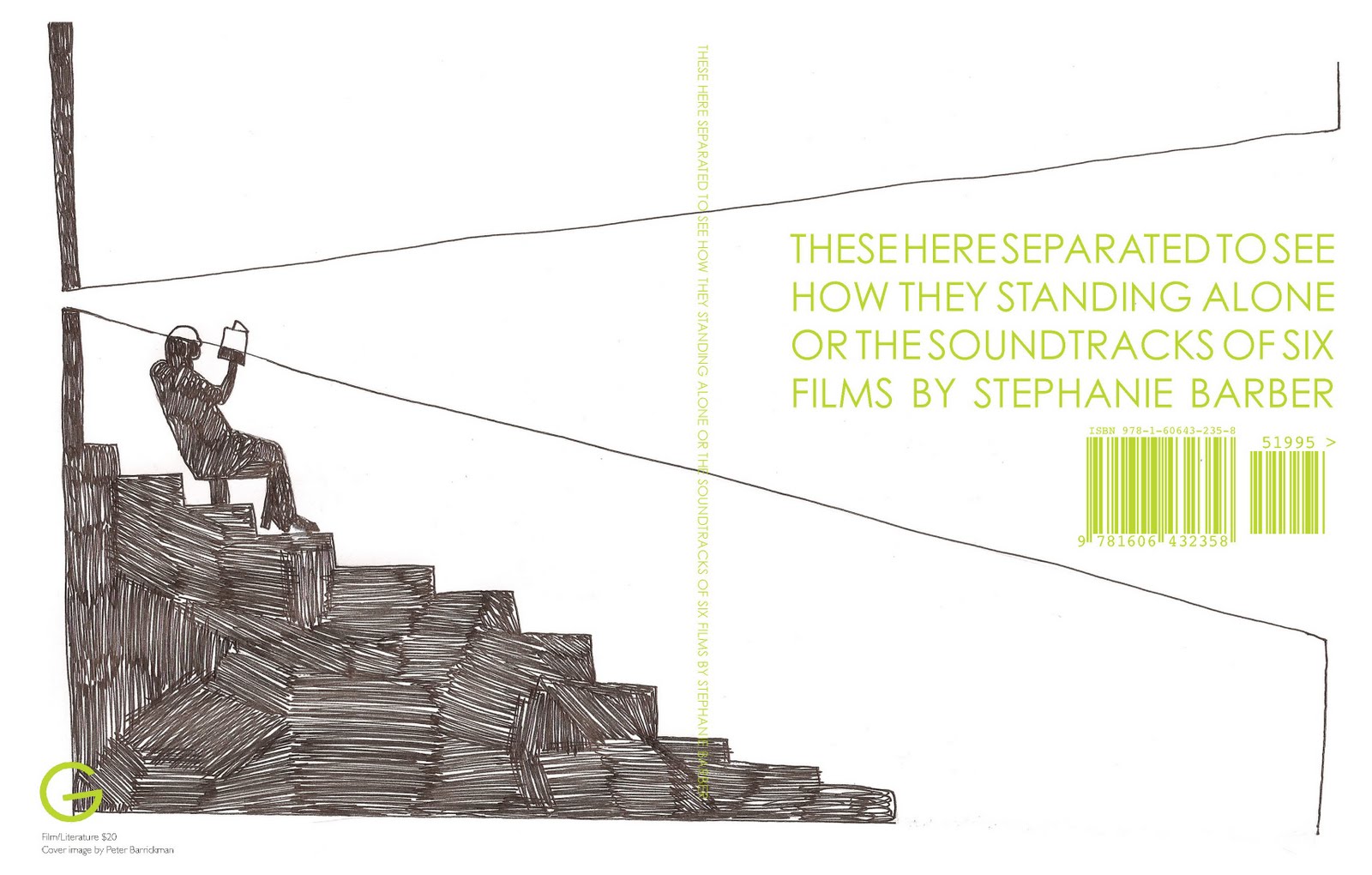 There are a lot of great videos on Youtube. Not yours though. Is that old fashioned or what’s going on there?
Um, this is a mean interview. Are you trying to be mean to me? I have not put my work on Youtube — the compression needed to upload something to Youtube does not make for attractive pieces. Other . . . sometimes people put work on Vimeo, I don’t know quite for sure. I haven’t thought about it enough. I don’t know why I don’t want to yet. It might be that I really like the effort involved with going to a theatre or a museum or purchasing the book. Or it might be that I just didn’t do it yet. I don’t watch videos on the computer, so it’s not something I spend a whole lot of time thinking about. And maybe that is old fashioned. "The Visit and the Play"

You mention Hume in the first piece, “The Visit and the Play” — “Hume, hum hum” — is there more to this reference than the sonic “Hume/hum”? I mean, in this video it’s a cheeky sort of high/low joke, but by the book’s end, with “Inversion” the writing has definitely become more philosophical in both the direct reference and in, like, the dialog between Spike and Pocket.
Hume is mentioned there before the song you’re talking about. Their conversation, the Big Puppet says, “Though he suggests that humans should find value independent of all things worldly” although that’s not exactly the right quote, “Hume also suggest a great refinement in the gratification of the senses.” It’s a contradiction in his work. I refer to it less because of a fascination with as to whether or not one attains fulfillment or enlightenment through asceticism, but because of the contradiction. It has nothing to do with what he’s saying, it’s the fact that he has said two opposing, contradictory things, as are the Big Puppet and the Small Puppet. They are this shattered one, as we all are.

Should I make that capital “O” one?
No. And I disagree that the “Inversion” is more philosophical than the other pieces. Just because in “The Visit and the Play” the philosophy is shrouded in humor and poetics, and in “Dwarfs the Sea” it’s shrouded in narrative, they’re both essentially philosophical pieces. When the Small Puppet says “I’m merely talking about some ideas I had on Tuesday, and now these ideas are just what bruises or wood carvings become,” that’s her unique way of contemplating the way we conceive of our existence through our thoughts. The ephemera of thought. Not ephemera, with the intangible nature, fungible —

Transitory?
Transitory nature of thought I guess, which is a huge, huge concept and speaks volumes about our desire to believe in our human experience as a truth. I like that little puppet because she drops that huge and beautiful thought and just moves on knowing other huge and beautiful thoughts will come, she doesn’t need to shine a flashlight on it as I am doing now.

Is there something frustrated after she expresses that, and thus the cursing song?
When they begin to sing that song, it is a certain surrender and glory and praise given to the pain and utter befuddlement of the ineffable nature of our existence.

That’s what I thought.
I love curses for their nothingness. Their cacophonous, flexible nothingness, so that they can express everything and nothing, but I don’t really use them in my daily speech. But I have a number of pieces, songs and performances, that deteriorate into a series of curses. Into a random collection of curses.

What’s one of your favorite curses that you’ve used in art?

[sings]
“Oh yeah I’ve been oh so sad
I’ve got it written down in this here notepad
One page says ‘sad, sad sad sad’
The other says ‘Goddam motherfucking shit ass.'”

Is that a Ms. Money Money song?
Yeah, don’t put that in there.

Why not?
I just never liked her name, although I like her songs–

To be clear, you are her.
Right, I like the songs I made as her.

I think it’s a great name.
Do you really?

Yes, on another subject, or perhaps a related subject–
But look at cats–

Oh yeah, they’re cute. But maybe this is related — why won’t Spike ever send his poem?
Ohhh. Well, Spike never did send his poem, and his love dated someone else.

About what?
About being rejected, or misunderstood, or mocked. Mocked for his tender heart.

So Pocket is a good friend to give him such a nice response.
Yes. But Pocket is possibly another mirror, like the puppets in “The Visit and the Play.” They are two sides of one being.

Interesting. Do you feel an affinity more for one than the other?
No. Because they’re both me. Particularly in “Dogs” they are both me. Why do you think “Dwarfs the Sea” has become so popular?
Because it’s very lovely. Also I think people are comforted by hearing stories of other people.

I know that’s right.
We have an endless fascination with how other people do it, and the slightest suggestion of narrative wraps people up in a cloak of comprehension.

And it’s nice too that the nuggets you give about each man are so short but so complete.
Thank you.

You’ve talked about how your working isn’t experimental film and that–
Are you sure you want to go down this path?

I’m going to get you to talk about people.
Okay, finish your question.

Is your work too audience-centric to be experimental?
What? I don’t know what you mean by audience-centric. Well, I’m certainly aware that I would like someone to watch my work. I don’t think I would make it if I didn’t think other humans existed. In some ways, people may think my work is less audience-centric, whatever that means, than a beautiful, abstract piece of work with somebody’s music put on top of it, because that work is a “great gratification of the senses.” And maybe the philosophical nature of my work to some might be more off-putting.
I don’t like this answer and anyway I don’t know what “audience-centric” means. My work is conceptual or poetic, whether or not people think it fits one category or not, I can’t get flustered about.

That’s good, that’s what I wanted. So talk about “Metronome” in this context. The imagery here seems to be more abstracted from the story than in much of your other work.
Not “Catalog.”

I see “Catalog” as a series of rooms, and in some cases, the story lines up with the room in an interesting way. I’m thinking of the girl in the doorway with the box as the narrator talks about the bottoms of doors. I think that’s right. But “Metronome” seems to be a completely random set of photos, and in some cases, their photo-ness is questionable, like they are too cropped, or too “inset” or something.
Well “Metronome” is a narrative, a narrative that is thinking about love and the seemingly dire consequences of its ending. The images are these pretty impervious spaces. They are so strange, I don’t know how a space can have no feeling of place–

As in the pictures in “Metronome”?
Did you ever read the book, Species of Spaces and other essays by Georges Perec? You know I didn’t.
Well, he writes about a lot of spaces. Everything in an apartment building or everything in a bedroom and you get such a sense of — they’re so evocative. These seemingly flat, list-like descriptions. But you can almost smell what the rooms and the avenues would smell like. Something about the images from “Metronome” is the exact opposite of that. Even though we can see it, we have this faith that seeing, this ocularcentric belief in the information that an image can provide us with. But it’s not really true. It’s not really so. The images for “Metronome” are willfully ungiving and the radio play is about the taking away of love, the ungiving of love, and like the Small Puppet’s musings on bruises or thoughts, the love will go away and have less impact on the world, hold less information than a photograph of an empty room.

I’m hearing two things from this interview that I don’t think I’ve thought about much with regard to your work.
That I’m a philosopher and I’m a romantic?

No, that’s exactly what I’ve always thought. But I’m thinking of specifically, first of all, about a great disappointment that hangs over your writing as a leitmotif. And second, more specifically to the actual imagery, about the priority of space in your work. The rooms that people move through and live in.
And hurt each other in and stage revolutions in, or wait outside of. Or imagine decorating, or wish they owned. Um, yes, I am interested in spaces. What does that mean? I don’t know what that means. I think that there’s something moving in the potential, what a space could represent. Like a flat to dream on.

Is that Shakespeare?
It’s something I say all the time. And no. What was the other thing? Disappointment. Yes.

Is that okay to say? Does it make you uncomfortable for me to point that out?
Write, “She sobs.” No [laughs], I think that I’m pleased that you have thought anything at all. And no it doesn’t make me uncomfortable because I think you’re dead on, but there’s that disappointment, and spaces, and so many jokes and philosophy and hopefully many, many things are happening. I think that expectation is the source of all human misery, and yet I am in a constant froth of expectation and hope and consequently, I feel very acutely disappointment.

Why carefully?
Well, that’s not where it’s important. It’s the next line. “I remember watching you dwell so lovingly on the creases of theatrical emancipation.” And then she says, “Yes, that was a sorrowful packaging.”


Stephanie’s book and movie package is available for purchase here.