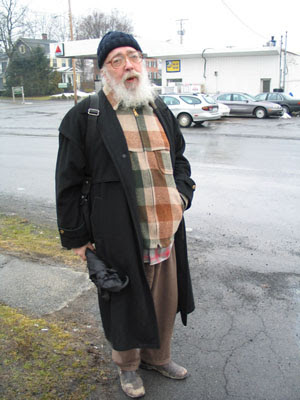 DeLillo’s depiction of the event itself, the beauty and abandon of pure chaos overflowing the boundaries (and/or transcending the naivete) of the issues themselves, put me in the mind of Bey’s Temporary Autonomous Zone. So I dug around on my bookshelf, and sure enough, there’s my old copy, complete with slightly faded yellow highlighting: “Or to take an even more Radical Monist stance: Time never started at all. Chaos never died. The Empire was never founded. We are not now & never have been slaves to the past or hostages to the future.” This is from one of the Communiques of the Association for Ontological Anarchy. In a separate Communique, the AOA offers up “slogans & mottos for subway graffiti & other purposes.” These include: “STRIKE FOR INDOLENCE & SPIRITUAL BEAUTY” and “YOUNG CHILDREN HAVE BEAUTIFUL FEET.”

How can you not love this guy? Anyway, the point of this post is that Bey, who is vociferously anti-copyright (given that he’s “against” property, government, and consciousness and religion as we know them, how could he not be?) has made just about all of his work available for free online, including the full text of The TAZ and several other of his books besides. Learn all about Immediatism! Read “The Manifesto of the Black Thorn League”! Learn about Bey’s own religion of choice, The Moorish Orthodox Church, which as I understand it is some kind of latter-day Islamic heresy founded by an American in the late 19th century. Nominate someone for the Jubilee Saints Project. In short–go apeshit a little. This is Voltairine De Cleyre, a Jubilee Saint. An American, she became an anarchist after the Haymarket protestors were framed for a bombing, falsely convicted at trial, and then hung. She wrote the essay, “Direct Action.”