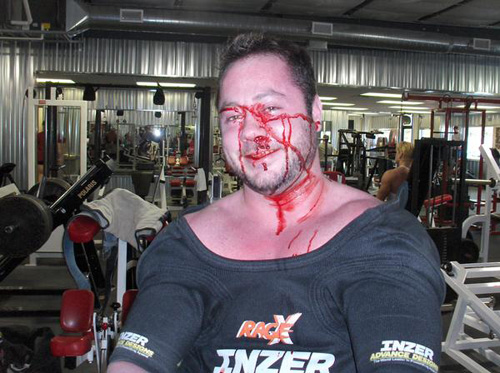 Blake recently posted a nice spotlight on Joe Hall’s Pigafetta Is My Wife. So now I’d like to announce a fun contest in light of his post: the Bloody Nose Contest, the three winners of which will receive a copy of Joe’s book.

If you’d like a chance at winning Pigafetta Is My Wife, please send to htmlgiant@htmlgiant.com (or leave your entry in a comment with your email address) an entry that somehow includes a bloody nose. Why bloody noses? Well, Joe is a compulsive collector of bloody noses. Entries can be illustrations, photographs, poems, short stories, photographs of napkins or other tissue that you used to stop your bloody nose, maps and/or diagrams of bloody noses, famous bloody noses in history, bloody nose encyclopedia entries, bloody nose nursery rhymes, bloody nose songs, etc. Joe will pick his top three bloody nose-related thingies, and to those winners he will send a signed copy of the book. He might bleed on the book a little. He might also send with the book a bit of rubbish from the beach by his house. He would offer more prizes, he says, but he lives in a house that is halfway boarded up, so he has nothing else to give you. Maybe he’ll send a piece of his house?

Let’s say the deadline for this contest is 11:59pm, Saturday, April 24th, at which point I’ll send the submissions on to Joe.

And if you don’t win, please give a thought to buying the book!

After the jump you’ll find a miniature interview with Joe.

Ryan, I mutilated/broke forever my spine by working at a greenhouse, a plant nursery, a Toys ‘R Us shipping plant, an industrial printing press, and a portable sawmill. I lifted, hauled, rolled tons and tons of material because I was too stupid to realize I could do better than these jobs and that these jobs were shit jobs because they destroy your body. My brother also hospitalized me when he hit me in the head with a hammer when I was three. I started collecting bloody noses around the same time that all this damage started to take the form of shooting pains and numbness in my chest, arms, and legs. Basically, I like upbeat or staged bloody noses. These people have messed up faces/visible damage in the face area, but they’re still getting by or don’t care. I am not a connoisseur of suffering. Quite the opposite.

How did you first read/learn about Antonio Pigafetta? What about him and his journals was so attractive to you/your writing?

I met Antonio on a beach crowded with flocks of frozen geese. I had to break them into chunks with a hammer?

Pigafetta didn’t have a vocabulary for the things he was seeing on Magellan’s “discovery” voyage. He had to work through awe/terror to get at a version of things that would make sense to a Western reader. And often it didn’t. So, on one hand, his book seems full of wonderful fanciful things–a mixture of unintentional and intentional lies, misperceptions, and fragmentary observations patched together. On the other hand, while his document seems “wonderful,” it was meant to encourage further exploration and colonial activity. It was instrumental in destroying its subject.

I identified with this because I was in love.

What is your favorite painkiller and why?

My favorite painkiller is clean living.

But doctors suggest cyclobenzaprine and Vicodin because it makes you feel melted. This will also give you crazy dreams.