What is Experimental Literature? {pt. 4}

Because Roxane’s recent post on Davis Schneiderman’s novel Blank engaged so thoughtfully with my ongoing “What is Experimental Literature” series (pt. 1, pt. 2, pt. 3), I decided to postpone my previously planned posting (which deals with the critical theory of Roland Barthes), and instead directly address Schneiderman’s novel and what I perceive to be Roxane’s basic concern about it: namely, what to do with it.

What follows is my attempt at answering what I perceive to be Roxane’s query regarding Schneiderman’s novel, as well as an attempt to grapple with the differences between conceptual and experimental works.

I have often pondered the last sentence in this famous response given by Edward Hopper when asked for his thoughts on abstract painting:

There is a school of painting called abstractionist or non-objective, which is derived largely from the work of Paul Cézanne, that attempts to create “pure painting” – that is an art which will use form, color, and design for their own sakes and independent of man’s experience of life and his association with nature. I do not believe such an aim can be achieved by a human being. Whether we wish it or not, we are all bound to the earth with our experience of life; and the reactions of the mind, heart, and eye and our sensations by no means consist entirely of form, color, and design. We would be leaving out a great deal that I consider worth while expressing in painting, and it cannot be expressed in literature.” [from Gail Levin’s biography of Hopper]

What is the “it” that cannot be expressed in literature? Pure form? Or, human experience that can only be expressed in painting? Or, the idea of design independent of man’s experience? To this day, I can’t figure out what he means. Maybe he’s gesturing toward the division between painting and literature: between each medium’s discursive boundaries? Despite my inability to clearly decipher it, I think there’s something important there.

There’s a there there.

Remember how Gertrude Stein described her hometown of Oakland in Everybody’s Autobiography:

...there is no there there.

Maybe what’s “there” in Stein’s sentiment is at the heart of a potential approach to Davis Schneiderman’s Blank, which is to say: even in the event of there being no “there” there, there is in fact always a “there” there of some kind. Derrida demonstrates this idea — I’ll go there in a minute — but I wanted to return to Hopper for a moment.

Consider his last great painting, painted when he was 81 years old: Like many of Hopper’s greatest works, it presents absence. It suggests questions more intensely than it provides answers. What is this place? It opens possibilities. Where is this place? It opens time. When is this place: the before this instance and the after? It conjures both hopeful and sorrowful emotions and thoughts, as absence often does. Who lived here before and who will live here in the future, who came and went, who loved and hated, who lied and who told the truth?

We perceive Hopper’s canvas to be a place, an interior space. These clues are given, or at least suggested. Thus, we might resist the comparison to Schneiderman’s novel on the grounds that Hopper’s canvas is not blank. There are walls, a window, something outside the space. But what does it mean for something to be blank? I mean, what constitutes the difference between Hopper’s “Sun in an Empty Room” (1963) and Agnes Martin’s “The Desert” (1965)?

(side note: According to an article published last year in The Montreal Gazette, Agnes Martin’s seemingly blank canvas, seen above, went to auction and earned “the highest price ever paid for an artwork created by a Canadian painter” — ~$5 million dollars!)

I would argue that neither canvases are truly “blank.” Just as Schneiderman’s novel is not truly blank. Like both of these canvases, Schneiderman’s novel has a frame: it is a book, it has a cover, it has clues that direct the reader toward a particular concept, namely: a novel. So, while the book attempts to present an absence, it is in fact reinscribing a presence.

As it turns out, absence is a hard thing to render.

Recall Derrida’s take on the role of absence as the core of a given system:

and how the tension between absence and presence corresponds to the power of freeplay:

Freeplay is the disruption of presence. The presence of an element is always a signifying and substitutive reference inscribed in a system of differences and the movement of a chain. Freeplay is always an interplay of absence and presence, but if it is to be radically conceived, freeplay must be conceived of before the alternative of presence and absence; being must be conceived of as presence or absence beginning with the possibility of freeplay and not the other way around. (both quotes are from “Structure, Sign, and Play in the Discourse of the Human Sciences”)

In other words, the substance of the artwork is constituted, in part, by the tension between what is there and what is not there.

Consider the opening page of Remy Charlip’s Where is Everybody?: 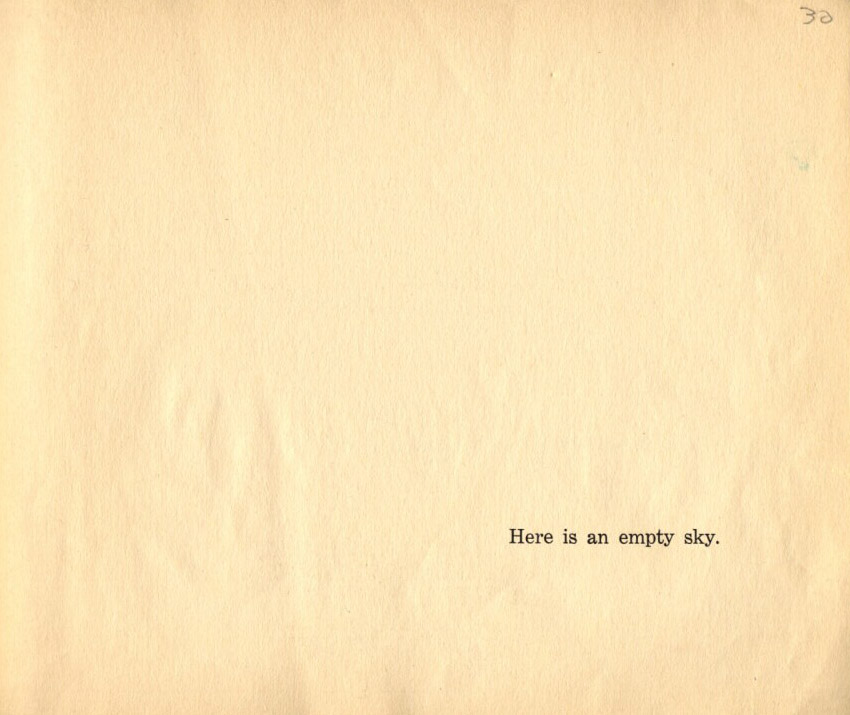 from a book titled Where is Everybody? by Remy Charlip (1957)

The words ‘Here is an empty sky” create the context that transforms the blank page into a representation. It gives the blank page a frame. Without the words, no context. Without context, confusion. And not only confusion, it is context that separates art from not art. A blank book that does not call itself a novel is merely a notebook or a diary or a journal. But a blank book that contextualizes itself as a novel shifts its ontology: it becomes an art object. This is part of the genius that Marcel Duchamp demonstrated with his infamous urinal sculpture: By taking the urinal out of its original context and placing it in a new context, Duchamp shifted the object from the realm of utility to the realm of art. He further solidified the demarcation between a urinal and a work of art by placing it sideways and signing it, thereby ensuring it’s unusability and inscribing it, marking it, signaling its difference.

Contemporary artist Nigel Tomm performs a similar move with his film adaptations. Here we see a shot from his 2008 version of Hamlet (the entire silent film is comprised of 63 minutes of pure white screen): 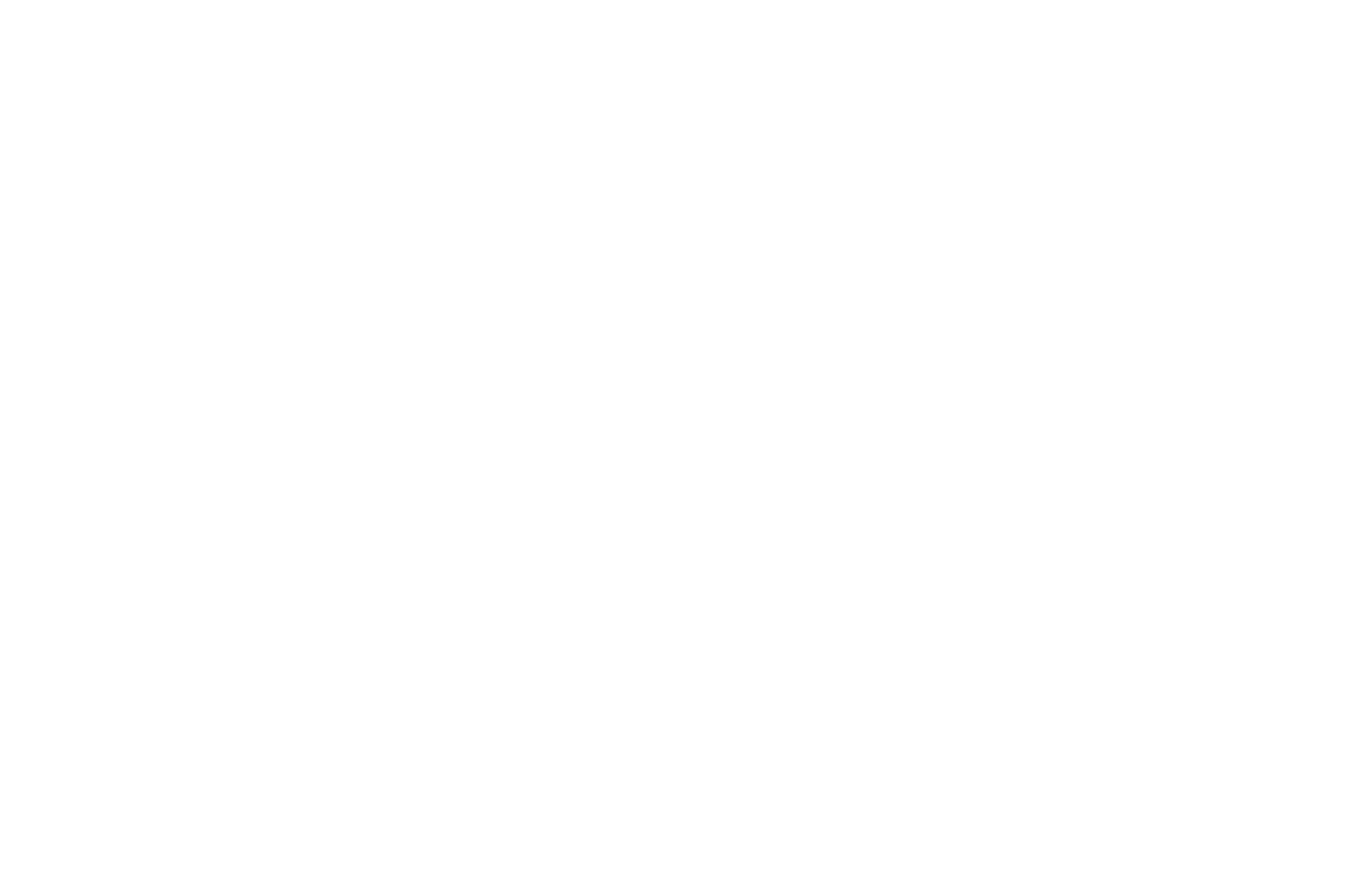 Calling the film Hamlet makes it something other than nothing. It creates context.

Of course it can also be the case that the context works to confuse rather than inform, in cases of absence. I’m thinking of Yves Klein’s “Le Vide”: Or else it could be that the context is not context, but rather a description. Here I’m thinking of Rauschenberg’s white paintings: 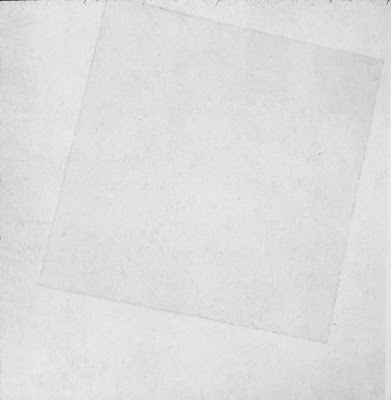 and Ryman’s “All white painting”:

In these examples, the title of the work does not necessarily function in the same way as in the previous examples, even though it would seem as though all of these works share a categorical allegiance. These titles describe in literal terms the object of our attention, much like Schneiderman’s novel.

This particular approach of describing the blank object also appears in the field of music. I’m thinking of John Cage’s famous work entitled 4’33” — a three-movement composition that instructs the performer not to play the instrument during the entire duration of the piece: four minutes and thirty-three seconds. When asked to explain the piece, Cage famous said, “I have nothing to say, and I am saying it.”

Here is a version of its performance, done by David Tudor:

We see in 4’33” the correlation between blankness, absence, and silence. In fact, it is well known that Cage wrote 4’33” under the influence of Rauschenberg’s white paintings (which I showed you above). In a way, Cage’s piece could be seen as an attempt to create a white painting in the field of music: absence of color and shape translated into absence of sound. The “point” of course, is that there is no such thing as absence of sound any more than there is such thing as absence of shape and color. Frames make absence impossible. Context always instantiates boundaries. What is not there will always leave a trace. A perfect illustration of this concept can be seen in the image of a chalk outline: 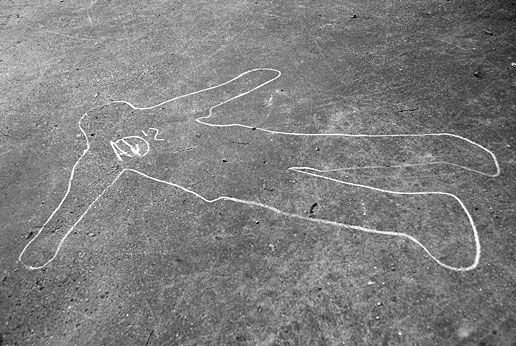 The silence of that image speaks loudly. The absence it attempts to demarcate only serves to engender a presence.

We return, once again, to the tension between what is there and what is not there.

Before John Cage’s 4’33” there was Erwin Schulhoff’s “In Futurum” (1919). All the notes are rest notes, marked “with feeling.” Here is a page of the sheet music:

the middle movement of Erwin Schulhoff's In futurum (1919)

And here is a performance of it:

Before Schulhoff, there was the French funnyman Alphonse Allais who wrote “Funeral March for the Last Rites of a Deaf Man” (1897)

Allais also created blank canvasses that relied on the context of their titles to give them gravity, such as his 1883 work “First Communion of Anaemic Young Girls In The Snow”: I share these precursors to indicate a genealogy, to place Schneiderman’s novel in historical and interdisciplinary context, to show that his book enters into an ongoing conversation. In fact, Schneiderman’s novel imbricates several ongoing conversations.  It would stand to reason that making these connections could in fact help us determine what to do with Blank, or how to think about Blank, or how to most effectively engage with Blank.

In conceptual art the idea or concept is the most important aspect of the work. When an artist uses a conceptual form of art, it means that all of the planning and decisions are made beforehand and the execution is a perfunctory affair. The idea becomes a machine that makes the art. [full text here]

In other words, the art object itself is not the final location of engagement, but instead should be seen as the catalyst to questions or ideas beyond the object itself. To give you an example that seems to coincide with our topic of absence or blankness, consider Doris Salcedo’s sculpture entitled “Shibboleth”:

Instead of introducing new material into the space, Salcedo broke open the floor of the museum. As the Tate Modern explains it: “Shibboleth asks questions about the interaction of sculpture and space, about architecture and the values it enshrines, and about the shaky ideological foundations on which Western notions of modernity are built.” Thus, the artwork is not about the artwork, per se, but instead is about the concepts or questions the artwork raises.

Perhaps Schneiderman’s novel wants to encourage a similar function? Perhaps the novel is not the most important aspect of the work; maybe the conversations, questions, reactions engendered by the object of the novel are more important.

This brings me to another of the ongoing conversations with which Schneiderman’s novel engages: conceptual poetics, or conceptual literature. Kenneth Goldsmith offers these words toward a definition:

In much conceptual poetry there is no critical reading per se, because the materiality of the text is entirely surface, sometimes mirrored, like 80s apartment walls. For example, there is no “reading” of a work such as Rob Fitterman’s “Mall Directory,” a list of stores in a galleria,10 or Craig Dworkin’s “Fact,” a composition on composition in which the chemical composition of the material in which the piece is materialized is itemized, or Steven Zultanski’s Pad, a litany of every single thing in and constituting his apartment, and whether or not his dick can lift it. There is nothing to be mined from these texts, no points of constellation or dilation, no subject within which to squat. The text object simply is. The reader is, but is irrelevant. But the thinker becomes quite important. There is no direction for this thinker, no spots to think to or horizons to muse toward, but there is a place upon which to think.11 [full text]