Playing catch up with the stacks [2]

Looks like I did something similar in May of last year. Must be something about the season.

What follows this time is a showcase of ten good looking things I have piled around my desk in the ever-growing, ever-shifting, to-read pile: stuff I haven’t read yet, but am looking forward to…beginning with…

Mine is grey blue, but it looks like they come in different colors. It’s beautifully hand-stitched. Each poem is titled the title of the book. From glancing at it, there seems to be an absence of punctuation but a presence of capitalization. There also seems to be an interesting tension between narrative and abstraction.

Here’s a little snippet from the right-facing poem in the center of the book:

and here’s the super cool book trailer for it: 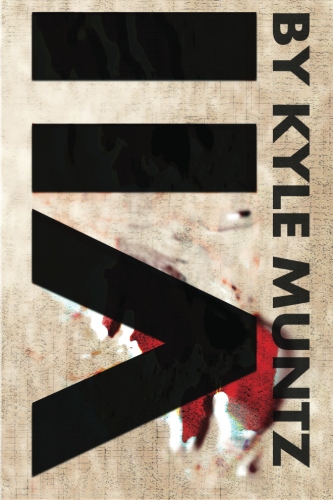 The subtitle to Muntz’s newest book is “The Life, Times, and Tragedy of Sir Edward William Locke the Third: Gentleman.” It purports to be a fictional autobiography in seven parts of a decadent libertine playwright whose life might or might not be influenced by his own plays. On the back cover, Brendan Connell calls it “A postmodernist Gothic, a work of sordid splendor and fierce hypnotism, at once haunting an poetic…” and Rhys Hughes compares it to the work of Bruno Schultz. I’m interested to read this one because I think Muntz is an under-appreciated talent. His previous book, Sunshine in the Valley

made a strong positive impression on me.

Published by the premier house of Bizarro Fiction, these two books by the editor of Lazy Fascist Press look pretty wild. No wonder Pierce’s work has been described as “an intoxicating blend of body horror and midnight movie madness, reminiscent of early David Lynch and the splatterpunks at their most sublime.”

Here’s a taster from the first of the three novellas in Abortion Arcade, titled “No Children”:

“Give us a child, give us a child,” the crowd chants.
The zombie holding my mother’s arm removes a metal key from within its dusty ribcage. The zombie shoves the key into the lock.
The heavy wooden door swings open, creaking on broken hinges.
The crowd leans forward as one big ugly creature, trying to catch a glimpse of the staircase.
Tears drip off my chin and I scream a final time, “I will fuck this farm to death.” 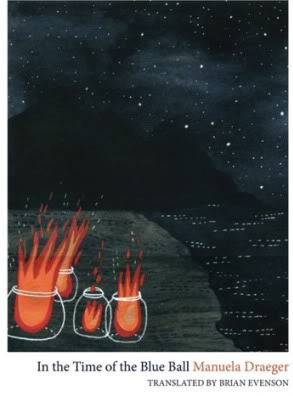 by an imaginary writer

Manuela Draeger, In the Time of the Blue Ball
(Dorothy, 2011) trans. by Brian Evenson

The Publisher’s Note at the back of the book explains that the author of this book is “a pseudonym for Antoine Volodine, which is itself a pseudonym for an author who keeps his own name a secret.” This brings to mind the conversation I had with Kent Johnson last year about pseudonyms.

At any rate, this book looks real enticing. The subtitle, which you only find when you open the book is: “Three Post-Exotic Stories.” For all the ill will cast upon the ubiquitous usage of the prefix “post,” I sort of like the sound of that: post-exotic stories. Here are the opening lines of each of the three:

The man who invented fire was a woman, actually.

Every day, here or there in the world, on the edge of the ocean or elsewhere, a little boy climbs onto a chair and sits down in front of a plate of macaroni or a bowl of noodles.

I don’t know how you feel about them, about baby pelicans.

The continuing adventures of Gus, the post-apocalyptic candy-loving hybrid child and his band of misfits, as they travel north toward Alaska. This comic book is heartbreaking. It’s also beautifully rendered, very cinematic, and at times brutal.

I have about a dozen or so comics I read regularly. This is one of the best, I think.

Here’s a page of Lemire’s inks from Issue #17, before the dialog or coloring:

Caldwell’s first published novel looks to be a promising metafictional critique of contemporary social and political stuffs. It looks funny and smart and poetic, too. Being in the middle of teaching Kafka’s “Metamorphosis” right now, the opening line of the “Enemy Combatant” section easily catches my attention:

Someone must have dropped a dime on our hero, for without having done anything wrong he woke up one morning from uneasy dreams to find himself transformed in his bed into an enemy of the state.

Steven Hunt, The Kingdom Beyond the Waves
(Tor, 2008

This is the second in an ongoing series of steampunk fantasy books. The Kirkus Review describes it as “Harry Potter mugs H.P. Lovecraft and L. Ron Hubbard explains it all.” Elsewhere it gets compared to Indiana Jones, China Mieville, Charles Dickens, Jack Vance, and Philip Pullman. That’s a pretty cool crowd. Winner of the prestigious James Triptree, Jr. Award, this book boasts a cast of three main characters (or, quantum outlaws): a physicist and serial killer, a mass-murdering pirate, and a Virtual Reality addict.

As someone who loves genre blending books as well as quantum physics, this one looks super fun.

This book looks so cool I can hardly contain my desire to put everything on hold and read it from cover to cover right this instant, but I won’t because I’m typing up this post and then I have to do bunch of other things and so I’ll just fantasize about it until I do get the time.

Basically, it’s a play-by-play account of Harpo Marx’s physical movements in all 13 of the Marx Brothers film in which he performed. There are stills from the movies on nearly every page. It’s like a long poem or a lyric essay on Harpo Marx’s body movements. I kinda already think it’s going to be the best book of the year, even though I haven’t read it yet.

Here’s a random snippet from page 69:

As authorities gang up on Harpo, he crosses his fingers. Pretzel gyrations and contortions (compulsive inner ballets of cognition) ward off cops and pogroms: crossed fingers establish instant immunity. Pretzel Consciousness: the self, folding its wings, tenses to simulate battle with the other, whether mother, father, or society.