Chris Toll, author of several books including The Pilgrim’s Process, Love Everyone, Be Light, The Disinformation Phase and the soon-to-be released Life On Earth, died on Thursday of natural causes. It was unexpected and unbelievable and too soon.

Chris was a poet and collage-maker. He lived in Baltimore, where he was an integral part of the literature scene. I invited people to send me their memories, which I’ve compiled here. Hopefully people will feel free to add more in the comments. END_OF_DOCUMENT_TOKEN_TO_BE_REPLACED Take a look at the scene where the mask-making doohickey malfunctions when they are at the hotel to make the deal with the French assassin and the henchman. Here we have some technology that is ridiculously advanced, capable of laser etching into some polymer substance, and also portable and also capable of paint mixing and spraying the paint (albeit not flawlessly, as the machine breaks down). OK, no problem; I don’t care about the probability of that. I’m happy to accept that they have such a device. END_OF_DOCUMENT_TOKEN_TO_BE_REPLACED I bought The Disinformation Phase basically because I liked the cover. Then I found out that was actually a good piece of criteria to go on: its author, Chris Toll had made it.  It’s a collage of unlikely portrait-sitters, kind of like his poems, which paradoxically at once seem made at home and extraterrestrial, like alien-worshipping cult flyers; you wonder if someone really believes all this.
END_OF_DOCUMENT_TOKEN_TO_BE_REPLACED 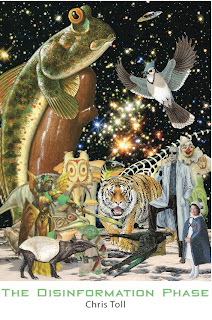