Anybody who’s remotely interested in the art of/work of writing should pick up the current issue of The Paris Review and flip to Dennis Cooper’s interview. It is pure inspiration. END_OF_DOCUMENT_TOKEN_TO_BE_REPLACED

In light of Roxane’s review, The Paris Review have kindly offered a discounted 1-year subscription to HTMLGiant readers: $28 for 4 issues, with the code GIANT12 entered during checkout via their website over the next two weeks. 1. New issue of Harp & Altar, with work by Matt Kirkpatrick, Luca Dipierro, Susan Daitch, A.D. Jameson, Ana Božičević, and several others. Also available, a print edition of their archives.
2. The Tyrant is blogging for The Paris Review.
3. The titular story from Ben Greenman’s What He’s Poised To Do appears now at Fictionaut.
4. Some people are real pissed about the NYker list apparently. It’s like being upset when the sun rises. Or sets.
5. Backlist staff picks at Dalkey Archive.

This is not Philip Gourevitch.

I bought the new Paris Revivew today. In it is a piece of fiction from the Paris Review’s editor, Philip Gourevitch. He is known primarily as a non-fiction writer, and a brilliant one at that. His book about the Rwandan genocide, We Wish To Inform You That Tomorrow We Will Be Killed With Our Families, is truly great and I read it alongside Hannah Arendt, a great biography of Pol Pot called Brother Number One as well as some other hardcore stuff on genocide and it completely held up to the company. But fiction? This is new to me. Also, it isn’t unheard of, but  I do think it is rare, for The Paris Review to publish thier editors’ fiction, so I think this is a real treat. Here’s the first graph of the story called “Enough”:

END_OF_DOCUMENT_TOKEN_TO_BE_REPLACED 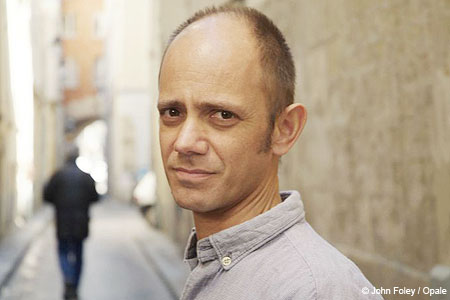 I love the long short story. I like short ones, too, but I think the length of 7000 words and up may be my favorite length. “The Lover” by Damon Galgut in the Paris Review is 38 pages long.  My guess is that it is approximately 10,ooo words. Galgut is the South African author of The Good Doctor, (very Graham Greenish, but with a flatter style) an accolade garnering novel I enjoyed so much I went onto Alibris and looked up his earlier work, work hard to find here at the time. I couldn’t get through a very harsh and violent book, Small Circle of Beings (I’m a pussy) and still have not picked up The Quarry, but I have enjoyed coming across his short stories in journals, (especially one that was in Zoetrope a few years ago.) “The Lover ” is classic Galgut, channelling a post-modern distance more Handke than DFW. His narrator, “Damon”, switches from primarily third person narration, to moments of first person narration.  Galgut’s switching back and forth felt random to me at first, but with patience, a pattern and reason emerge. END_OF_DOCUMENT_TOKEN_TO_BE_REPLACED