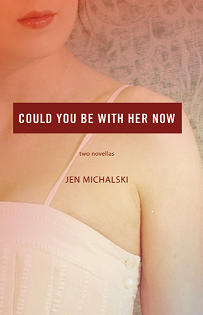 First new book of 2013? Yep. Jen Michalski has three books coming out this year—one each from Dzanc, Black Lawrence and Aqueous Books. The first, Could You Be With Her Now, is itself sort of like two books, because it’s made up of two novellas. They’re both comprised of short chapters. “I Can Make it to California Before it’s Time for Dinner” is a story about a mentally, uh, diminished kid who kills somebody within the first 1000 words, then goes on an adventure by getting kidnapped. It’s really great, reminds me of Joyce Carol Oates in a good way. The second novella, “May – December,” is about a young woman helping an older one do a blog. I heard her read from it on Saturday and was struck by the way she braids memories around each other. Jen is an astonishingly sensitive writer. Could You Be With Her Now makes me want to yell GOAL! and celebrate the first part of Jen’s 2013 hat trick.