by Anne Boyer (originally at Odali$qued). I liked this essay so much when I originally read it that I asked Anne’s permission to re-post it here, and she graciously agreed.

1. It won’t be called the avant-garde. It will be referred to by various names, all of them precise, like “the society for touching lightly the forearms of  another” or “a tendency toward making chains of half-rhymes in a circle with one’s friends.”

2. It will share with the historic avant-garde that art will often be made in groups, but it will seek or find the artistic and literary expressions that mimic something other than war or machines or violent manly death, something like “human touch” and “animal touch” and “comforting noises made when another is ill” and “maternal protection” and “friendly ritual” and “a little daub of secretion” or “just like playing cards with my aunts and uncles” or “the soft feeling of an arm” or “game for which the rules are never directly stated but which everyone knows how to play.”

3. It will be a great deal more about the omphallus than the phallus.

4. It will be fascistic in that it will be devoted to play.  In this, it will mimic my dining room.  Like the avant-garde in history, the best thing about it will be its games, which will proliferate and in this proliferation be in a constant state of alteration.

5. There will in this avant-garde be no fixed rules for these games, so one cannot, though one might try, publish a book called “THE RULES OF THE GAMES OF THIS” or they can publish this book, but only find it full of reliable recipes for chocolate cakes and inexpensive soups and instructions for encrusting ants with gold while not denying them their mobility.

6. It will organize itself around the notion of committing one’s life to soothing and assisting, but this art will soothe and assist in ways as yet unknown.  It will not soothe like base sentimentality or luxury goods, which are not that soothing. Instead it will use art to find methods of delirious compensation for the twentieth century.  It will be “extreme care.” 8. Boredom will have its uses, as it always does, but it will not become a value.

9. All ideas will be tested by writing them in dry erase marker on a white board and leaving them outside in the elements “to weather.”    Those that survive will be implemented.

10. Its artists and poets will make in their work delicious and obvious entrances.  Its
works should always begin with “HELLO.”

11. It will include both robots and animals, sometimes robot-animal chimeras. There will be other chimeras, too.  I recently read that the great question of our time is “Am I machine?” and though I do not know if this really is the great question, no one will mistake herself for a machine who also has a tail.

13. There will be children, though often not in the ways we expect them.

14. It will make no fetish of form, or rather, it will seek such a multiplicity of forms, which results in such a formlessness that its forms cannot be dumped out and reused as sacks to hold the stuffy or banal or slightly/greatly evil. 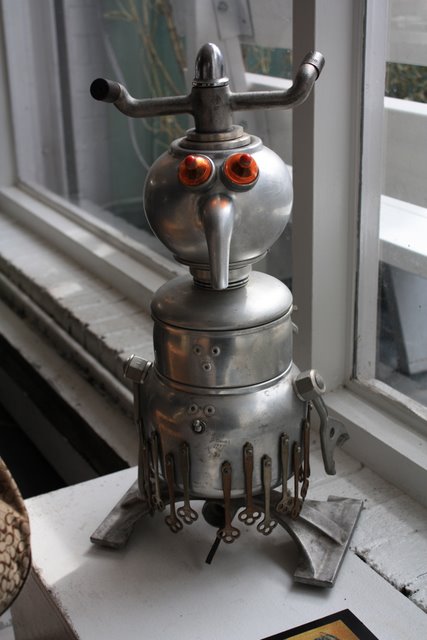 16. Its transmissions will be much more like milk from a breast than spilling seed.  This is not to say men can’t do it, too.

17. There will be a lot of sewing last year’s fragments with this year’s threads.

18. It will revive the brilliant idiot.

19. Because it is committed to something like comforting, it will build for those who hate it a papier mache giant with a familiar sort of face.  Artists and poets will be on megaphone rotation saying such things as “art is war” and “we love money and/or death” because it is this sort of statement, alone, which the enemies (having been, early in life, deprived of 90% of something) can hear.    The enemies will squat and defecate, then sling their feces at the giant.  They will be amused enough, imagining themselves in a battle with something real, “look at us proud warriors” or “I’m getting my individuation on.”   The feces will be composted and used to fertilize fields in which the enemy’s food is cultivated.

20. If these enemies ever encounter this avant-garde that is not the avant-garde outside of this ritual they will not be able to recognize it.  They will say “what is this noise?” and
“there might have been twinkling” or “is this love or is this incoherence?”  or “manly women and effete men!”

21. Institutions will not want it, as it resembles what is exactly not important. It’s okay because it will sort of ignore them.

23. It will develop many languages, all of them like lovers to each other or parents to their child.  These will probably be embarrassing.

24. It will be utopian, in the sense that it wants furniture enough for every home and home enough for everyone.  No one will ever confuse home for the enemy of art, or a woman with a home.

I have borrowed many of these ideas, precisely:

Anne Boyer is the author of The Romance of Happy Workers (Coffee House Press 2009). Find another great Anne Boyer essay at Delirious Hem and find Anne Boyer’s poetry spread fairly among many of the internets.