The Perfect Stutter: My Only Wife by Jac Jemc

Consider the last breath of Jac Jemc’s forthcoming novel My Only Wife:

Notice the repetition of the word “and” in that top line. It’s a stutter so subtle it could be mistaken as a typo, but I hope it’s not a typo. I hope it’s strategically placed, because I believe it’s perfect. Such a small thing: the word and. But such a large thing it conveys.

Hesitation. Frozen in the moment, if only for a moment.

Lucien Freud, who told curators at the Tate Britain museum in advance of a major show in 2002, “I’m really interested in people as animals.”

naked man with a rat

In his essay, “Deleuze and Beckett: Disguising Repetitions in Endgame,” Thomas Cousineau argues, “In Beyond the Pleasure Principle, Sigmund Freud maintained that we repeat because we have repressed a traumatic experience which then returns in symptomatic form. Gilles Deleuze, on the contrary, insisted in Différence et répétition that we do not repeat because we repress; rather, we repress in order to repeat. In a reformulation of this same point, he contended that we do not disguise because we have repressed; rather, we repress so that we may disguise. Along with arguing for the primacy of repetition over an earlier traumatic event that has been repressed, Deleuze further suggested that the highest function of art is to put into play all the various forms of repetition, ranging from the most clichéd to the most creative.”

Currently on exhibit at The Freud Museum, Louise Bourgeois’s The Return of the Repressed: 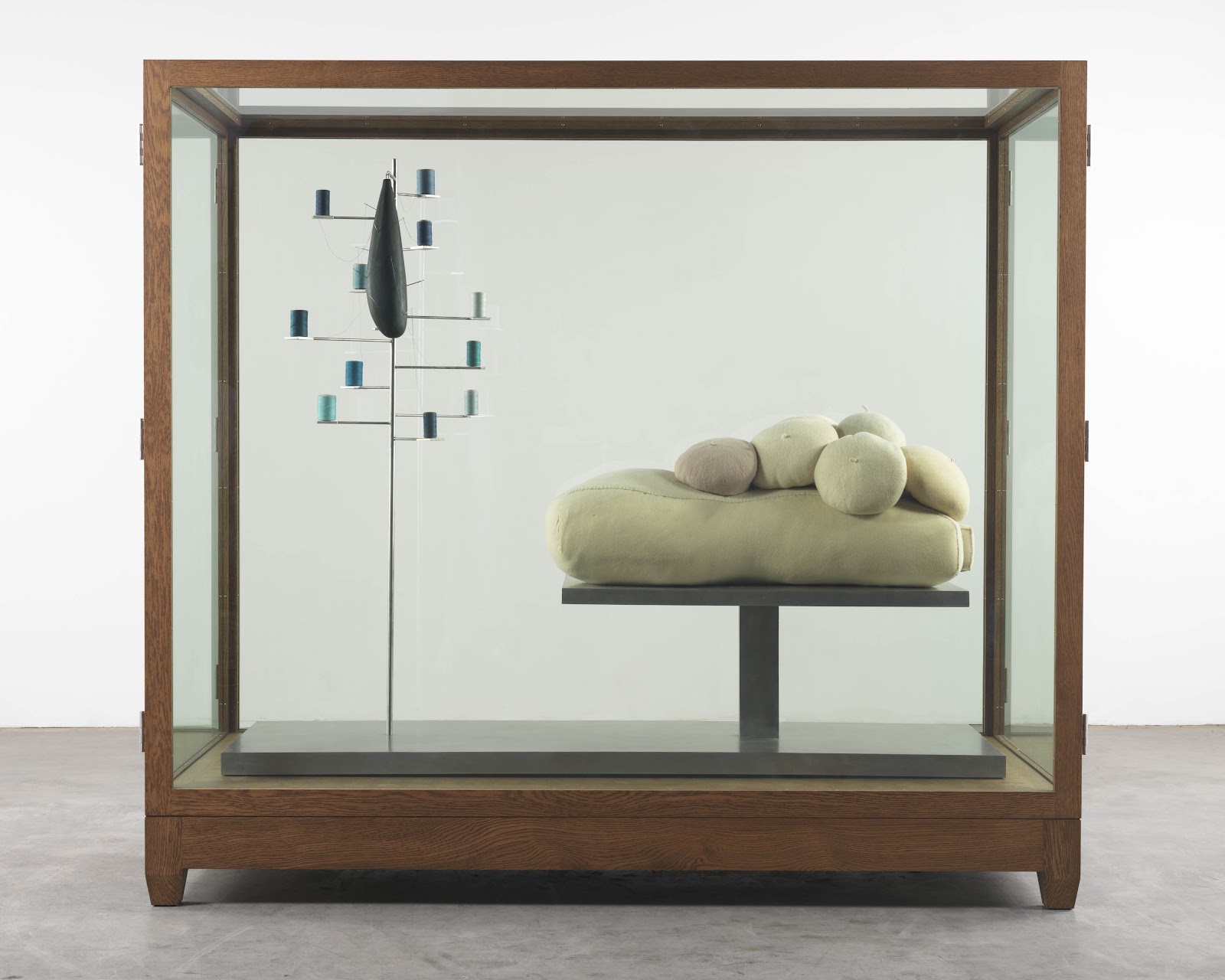 “Two prawns in the night.
Rakes, rakes. All wrapped in red. These are ways of budding at Little
Gidding. A hickory, a hind, undisturbed lands.”

–“Decorticated” from The Cow by Ariana Reines

Repetition and obsession reminiscent of Alain Robbe-Grillet’s Jealousy. Recall, for example, the narrator’s attention to A . . .’s hair. On page 56 Robbe-Grillet writes, “She has arranged her hair into a low knot whose skillful waves seem about to come undone; some hidden pins must be keeping it firmer than it looks.” And then again, on page 60, “The knot of A . . .’s hair, seen at such close range from behind, seems to be extremely complicated. It is difficult to follow the convulsions of different strands: several solutions seem possible at some places, and in others, none. […] The knot of A . . .’s hair is at least as confusing when it appears in profile.”

To see the wife is to imagine the wife.

The final breath of Jack Boettcher’s Theater-State, “Remember,” Stone said, “when the time comes, it’s detonate—-not deflagrate. And Janus? If I ever reappear to you in the form of another – perhaps as someone strangely familiar or even dearly loved – do not be alarmed or surprised.”

Theater State, which begins with an epigram from Clayton Eshleman, “The imagination is the truth.”

Joel grieving the loss of Clementine, in Michel Gondry’s Eternal Sunshine of the Spotless Mind:

“I’m not immune so I commune
With the objects in my home
I am caressed by my razor
And so am not alone
I spoon an oversize pillow
Which I bought for just that use
And to the flowers in my garden
I am lover, not recluse”

“Love,” John Hawkes tells us in The Blood Oranges, “weaves its own tapestry, spins its own golden thread, with its own sweet breath breathes into being its mysteries — bucolic, lusty, gentle as the eyes of daisies or thick with pain.”