The well-respected, finically solvent and totally fun-to-chill-with advertising agency Droga 5 created these outdoor ads for the Coca-Cola Company, which recently appeared on the streets of New York City. They have a poetic quality, seeming to evoke certain characters and a unique Manhattan headspace. Longer than most written ads, and with an obvious, weighted subtext, they speak in a slippery psedo-literary voice.

At the meta level, “Droga” means drug and people in advertising still use cocaine recreationally. So, as is said, straight from the horse’s mouth. This first piece, widely blogged and Tweeted about, reminds us that any lack of success has more to do with internal failings than external ones. Call it soda libertarianism. You don’t need history or context when you have spunk and a cocaine joke. There’s certainly something to be said for determination and goal-setting but I don’t recommend anyone move to New York without six months savings and a few job interviews 100% locked down. 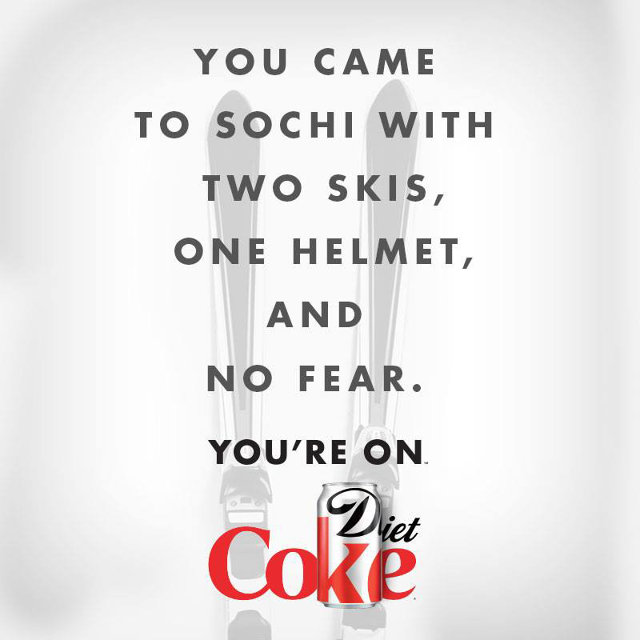 Drug use in sports–even caffeine–is somewhat frowned upon, no? The world-class athlete’s body is s a finely tuned instrument. Although I do like the slightly eastern polemic of discarding fear. It feels very Dune. It also speaks to numbness, something that happens both during skiing and cocaine. And while skiing involves mountains of cold white snow rushing past your clenched jaw, cocaine…. [….]…

Football people use sweet soda with caffeine, and so do people working in NYC’s garment industry. When they have important career moments, Coke is nearby.

Flaunting these enjambed sentences,  Coke’s marketing team positions itself the neurotic late-20-something, slightly-more-historical energy drink with a fun, big-city backstory. Less extreme than Red Bull or Monster, but more self-aware than regular Coca-Cola, the style of these ads alludes to a mythic, youthful energy. Taylor Swift, the spokesperson of the larger “You’re On” campaign certainly exudes this seething, boundless striver mentality. She has fame, money, and the work ethic of an auto assembly robot. If I were her, I’d probably cut back on the endorsement work.

It should be noted that the “You’re On” campaign felt less drug-related before these outdoor ads appeared, as if this conversation about personal success, drug use, syntax, and corporate power has been rumbling up from the murky depth’s of Droga’s creative department for some time.

I can’t remember what came first, this kind of selfie-help bullshit in advertising, or this kind of sucess-thinspo bullshit on people’s inspirational Tumblr image macro posts.

Oh wait I remembered; it was advertising. Tumblr wasn’t around during the twentieth century’s initial self-marketing boom. I can’t remember the original me generation or what came before it. I assume it was debris in the emotional wreckage of one or more world wars.

This last poem is almost self-effacing. The absurdity of “a really cool DJ name” is either playful or sardonic. Also, note the awkward conflation of DJ and MC, probably speaking to the necessity of appealing to (what is still for whatever reason called) “the urban market,” using a single sentence that leads into the tagline.

In all cases, the second person “you” is like… horrific. Almost as if it could become a brand new grammar of narcissism, stroking a reading in a dark, confusing way. Headlines like these are the masturbatory junkfood or our starving modern personalities. Do you read this and think of yourself? Not consciously or intentionally. But it persists.

In my experience, the ads that speak most directly are hardest to trust. They want to change how people see themselves, an act that is almost never honorable in marketing communications. Self-awareness is delicate and hard to handle. When paired with cocaine references it’s black comedy, edged by white powder.

And I’m creeped out by the most obvious message, however vapid or shielded by humor. Competition for the sake of what?

The most insipid type of New Yorker values competition and believes that an endless amount of hard work and naive moxie can produce financial success, art, and even happiness. This campaign scrawls a very explicit pean (almost like bathroom stall art) to the long-dead dream of NYC art meritocracy, of fake-it-till-you-make-it, of the cream rising within the cultural production machine, rather than being slopped off into a vast sea of mediocrity and waste, the citadel of churning, blind corporate power. Manhattan margarine 3rd avenue condo monoculture. The wonderful, high-energy creative lifestyle only NYC has to offer™.

It’s dumb but pointed. Cynical, yet more thought-provoking than the average campaign. It pushes the words to the breaking point of acceptability, like very jaded marketing sometimes does–the animated writing itself, perhaps as disordered and disillusioned as the people who make and consume it.

So, it’s the perfect way to sell sugarless amphetamines. Validate empty ambition, brand the caffeine high with a logo and a cheap American story. Coca-Cola again denies any association with cocaine. This is a stinking lie, obviously, considering the product originally contained cocaine or related chemicals (does it still? Can the recipe really be proprietary and not contain something tantalizingly evil?). Marketing people aren’t paid to be stupid and naive, usually. They have some murky notion of valuable controversy.