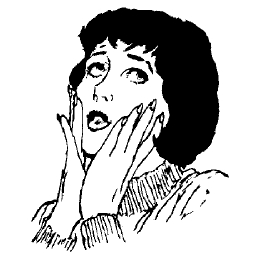 This post is Not Safe For Work! Nor is it safe if you are a huge fan of Redbook Magazine. So, yeah. No need to read:

Tomorrow is my birthday. I lied when I said I was 41 a few weeks ago- I will be 41 tomorrow. I was saying it to get used to saying it. I’m drinking homemade, fresh lime margaritas and am upstate, where I  will spend most of the summer. My neighbors here are all Republicans and say things like “we should burn all the mosques!” That’s OK, because I don’t really have to talk to them much. I’m just so happy not to be breathing the garbage infused stench of downtown Brooklyn that I’ll put up with retards!

Goblin Cock’s song “Big Up Your Willies” makes me happy on my birthday weekend. It has that disturbing bass thing going on where you feel like someone is pounding on the inside of your heart with a boulder. Nice. (Click her for their myspace page).

Goblin Cock makes me think of all things cock. We were in the car, cranking it (older son; “can I put this on my ipod?” me; “sure”, older son; “yeah! I’m going to update my facebook status with “there is a band called Goblin Cock” ; me “no you’re not, you’re facebook friends with your fourth grade teacher Mrs. Morris”), and I started thinking of the book Crazy Cock by Henry Miller, a book I read in manuscript form when I was a foriegn scout. I was a huge Henry Miller fan and was so thrilled to have the opportunity to read Crazy Cock. Three other women worked with me and I was worried that we would fight over the manuscript, but that did not happen. As my time there lengthened, I soon discovered that the other women were actually not interested in books, more or less, at all!  And no one was a Henry Miller fan. Anyway, I loved it- it was an early manuscript that was published posthumously (I think, this was ages ago, I could be wrong) and  whenever that happens, there’s some contraversy regarding whether or not Miller would have wanted it published, whether or not it was worthy of publication, and so forth.  I think I later bought the book but I have no idea where anything is, of course. Here’s a link and and an excerpt:

Suddenly, without let or warning, a dynamo broke loose inside her. Every particle of her molten being was convulsed with shuddering raptures. Mottled words drugged her with venemous lust…She felt that in everything, sublime or ignoble,  there was hidden a turbulent, a vital force, a significance and beauty which art, however glorious, was but a pale refection. “I want to live!” she muttered wildly. “I want to live!” Then I started thinking about my cat Rafa’s (he’s named after the tennis player, Rafael Nadal) penis. He has been in the hospital these past few days because the poor thing had an “obstruction” and couldn’t pee. It can happen again, too. And if it does, they sometimes cut off the tip of the cat’s penis because that is the best way to widen the cat’s urethra. Or something like that. My poor Rafa!

This was him about 9 months ago. My kitty!

Which leads me to Rafael Nadal. Um, I’m trying for a literary connection here and all I can think of is “cock”. Um, David Foster Wallace loved tennis? Uh, he really liked Federer? I wonder what he would think about how Federer is now number 2 and Rafa is number 1. I wonder if he would resort to the same silliness ( and wrongness) that many people do in regard to Rafa’s game, and talk about his athleticism and how strong he is and so forth. I would hope not. I would hope that DFW would understand the genuis, the talent, of Rafa. I would love to sit around talking tennis with DFW. Really. The French Open starts tomorrow, on my birthday.  I feel blessed. Rafa has won it four years in a row. That is a record. (I am 90 percent certain- sorry, second margarita kicked in.) And, yeah, I would gladly chop off my right pinky finger with a rusty knife for ONE NIGHT with Rafael Nadal. Sad, but true.