HTMLGiant: So how long did it take you to read the book?

David Fishkind: Three weeks I think. It took me about three minutes per page, so… forty-eight hours. I spent two days reading the book.

HG: Did you ever read the book in public places or leave the book out purposefully when visitors were over?

DF: It was a library copy, so really, it didn’t matter. But yes, I read it on the subway and kept it on my bedroom desk and in my backpack.

HG: How did you deal with it? Do you think you’re a big man or something?

DF: I don’t know. I thought I’d feel proud of myself. I ate seven or eight handfuls of blueberries when I finished. I didn’t cry or anything. Sometimes I looked words up in the dictionary. 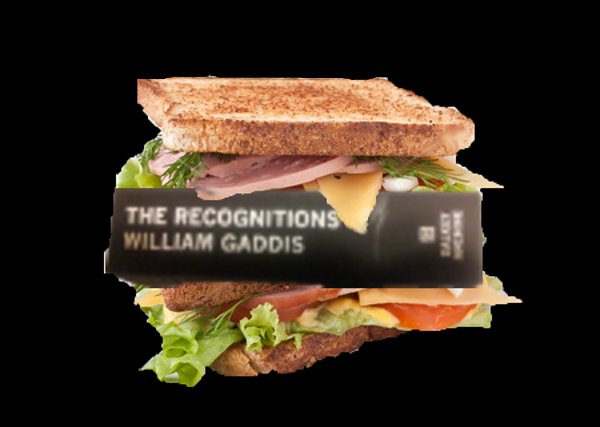 HG: Have you read other Gaddis? How did this book compare?

DF: No. I guess maybe I’ll read JR in a year or a few months or so. I guess I’ll read them all if I don’t first die.

HG: Did you ever read the book while on drugs or alcohol?

DF: Once or twice I’d had a some alcohol to drink, but it didn’t really do anything. I didn’t feel drunk, though I was… I didn’t tell anyone I was drunk… so…

I didn’t read it on drugs, but don’t quote my name because I don’t want anyone to know I don’t do drugs.

HG: What other “large books” have you undertaken?

HG: What type of training did you do to read The Recognitions?

DF: First I read Wittgenstein’s Mistress with the intention to read The Recognitions after. It’s the summer… I can do… That protagonist in Markson’s book mentioned The Recognitions and Gaddis a few times, which was an interesting coincidence. I guess it made me think “When is the part with the clock going to happen?” which was… it was a kind of trigger. I really didn’t know what I was getting myself into until I read the first page… It was… Then I just kept reading.

HG: What type of pacing did you use? Did you read the same amount daily or read it in spurts or what?

DF: I read when I could. Sometimes at work, other times not at work.

HG: Did you ever think about quitting?

DF: About fifteen pages in I considered quitting.

HG: Do you think everyone should read The Recognitions?

DF: I don’t think everyone should do anything…

HG: What’s your problem anyway? You seem really down or something?

DF: I… No… Reading the book didn’t make everything bleak feeling… I…

HG: Yeah, well put, David. I heard you used the word “diatribe” on Gmail chat and then some words like “gamut” and “druthers” in something else. What’s that about?

DF: That…? Sometimes I have… you know? When you really…

HG: I know a lot of people require approval today. Did you feel a need to talk about “reading The Recognitions” to others while reading the book?

DF: Nobody I know had even read that book. I tried to email some people I don’t know about it… I used the word “diatribe” on Gmail chat once.

HG: Where is the book now?

DF: On the chair in my bedroom. I was going to return it to the library, but then I thought… You know… When…

HG: Well, you did it. What did you think of the experience?

DF: I don’t know. I got to the end and… I tried to, you know, like… I tried to change my Facebook likes to… I wanted. I wanted.

HG: What are you going to—

DF: Once my boss said she didn’t finish Infinite Jest because it was too arduous and annoying or something and I interrupted her and said I’d never give up on something like that, that I’d finished it. Then everyone was quiet… like I’d tried to castigate her and then… I hadn’t, you know… I was trying…

HG: What are you going to read after this endeavor?

DF: Because I really do like people… I really… I want everyone to be happy. I want to eat the blueberries and look outside and get to the water sometime. I don’t like Europe, you know, because it feels phony… counterfeit. The book was about a struggle, I thought. It was the struggle, where others are just the jest or the big fuck you and this was like… Incorporate me into the religious, I mean moral… artistic… struggle about the, you know the… I was at a party and I was thinking about the…

HG: To read, but what are you…

DF: I got this copy of Falconer at an art exhibit at PS1 where you take free books. It’s in my bag.