How Did Europe Arrive At Futurism? : A Convulsive History of Art & Culture Previous to the Emergence of the Historical Avant-Garde

The 18th Century: The Age of Enlightenment

Nobody ever saw a dog make a fair and deliberate exchange of one bone for another with another dog. Nobody ever saw one animal by its gestures and natural cries signify to another, this is mine, that yours; I am willing to give this for that. When an animal wants to obtain something either of a man or of another animal, it has no other means of persuasion but to gain the favour of those whose service it requires.

The Palace of Perfumes, which was termed likewise The Incentive to Pleasure, consisted of various halls, where the different perfumes which the earth produces were kept perpetually burning in censers of gold. Flambeaux and aromatic lamps were here lighted in open day. But the too powerful effects of this agreeable delirium might be alleviated by descending into an immense garden, where an assemblage of every fragrant flower diffused through the air the purest odours.

The Life and Opinions of Tristram Shandy, Gentleman by Laurence Sterne (1759)

They bury their dead with their heads directly downwards, because they hold an opinion that in eleven thousand moons they are all to rise again, in which period the earth (which they conceive to be flat) will turn upside down, and by this means they shall, at their resurrection, be found ready standing on their feet. The learned among them confess the absurdity of this doctrine, but the practice still continues, in compliance to the vulgar.

from Gulliver’s Travels by Jonathan Swift (1726) Thomas Gainsborough "Conversation in a Park" (1740)

All are but parts of one stupendous whole,
Whose body nature is, and God the soul …
All nature is but art, unknown to thee;
All chance, direction, which thou cannot see.
All discord, harmony not understood;
All partial evil, universal good
And, spite of pride, in erring reason’s spite,
One truth is clear: Whatever is, is right. How did they meet? By chance like everyone else. What were their names? What’s that got to with you? Where were they coming from? From the nearest place. Where were they going? Does anyone ever really know where they are going to? What were they aying? The master wasn’t saying anything and Jacques was saying that his Captain used to say that everything which happens to us on this earth, both good and bad, is written up above.

from the opening of Jacques the Fatalist by Denis Diderot (1796)

Jacques-Louis David "The Death of Socartes" (1787)

Since nothing is ever present to the mind but perceptions, and since all ideas are deriv’d from something antecedently present to the mind, it follows, that ’tis impossible for us so much as to conceive or form an idea of any thing specifically different from ideas and impressions. Let us fix our attention out of ourselves as much as possible; let us chase our imagination to the heavens, or to the utmost limits of the universe; we never really advance a step beyond ourselves, nor can conceive any kind of existence, but those perceptions, which have appear’d in that narrow compass. This is the universe of the imagination, nor have we any idea but what is there produc’d.

–from The Treatise on Human Nature by David Hume (1740) 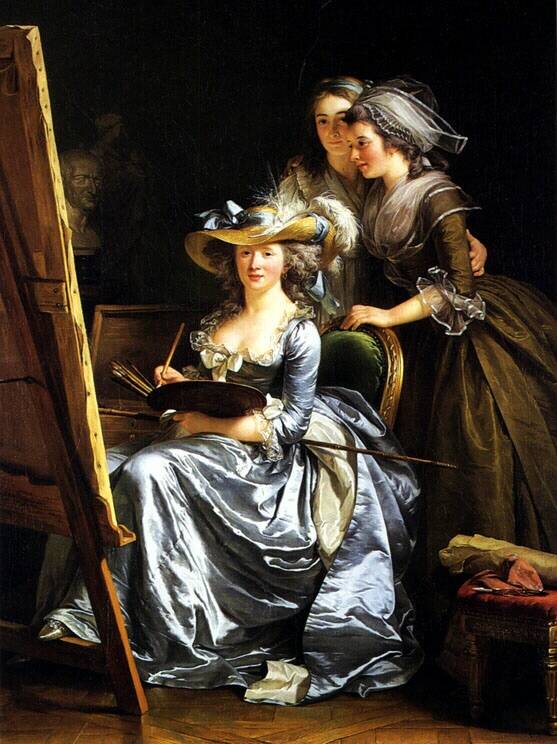 Never lose sight of the fact that all human felicity lies in man’s imagination, and that he cannot think to attain it unless he heeds all his caprices. The most fortunate of persons is he who has the most means to satisfy his vagaries.

–from The History of Juliette by Marquis de Sade (1797) To the other extreme…

The 19th Century: The Age of Romanticism

Freeman and slave, patrician and plebeian, lord and serf, guild-master and journeyman, in a word, oppressor and oppressed, stood in constant opposition to one another, carried on an uninterrupted, now hidden, now open fight, a fight that each time ended, either in a revolutionary reconstitution of society at large, or in the common ruin of the contending classes.

Though you should build a bark of dead men’s bones,
And rear a phantom gibbet for a mast,
Stitch creeds together for a sail, with groans
To fill it out, bloodstained and aghast;
Although your rudder be a Dragon’s tail,
Long sever’d, yet still hard with agony,
Your cordage large uprootings from the skull
Of bald Medusa; certes you would fail
To find the Melancholy, whether she
Dreameth in any isle of Lethe dull.

–the canceled stanza from “Ode on Melancholy” by John Keats (1819)

Fog everywhere. Fog up the river, where it flows among green aits and meadows; fog down the river, where it rolls defiled among the tiers of shipping and the waterside pollutions of a great (and dirty) city. Fog on the Essex marshes, fog on the Kentish heights. Fog creeping into the cabooses of collier-brigs; fog lying out on the yards, and hovering in the rigging of great ships; fog drooping on the gunwales of barges and small boats. Fog in the eyes and throats of ancient Greenwich pensioners, wheezing by the firesides of their wards; fog in the stem and bowl of the afternoon pipe of the wrathful skipper, down in his close cabin; fog cruelly pinching the toes and fingers of his shivering little ’prentice boy on deck. Chance people on the bridges peeping over the parapets into a nether sky of fog, with fog all round them, as if they were up in a balloon, and hanging in the misty clouds.

–from the opening of Bleak House by Charles Dickens (1852)

All men hate the wretched; how then must I be hated, who am miserable beyond all living things! Yet you, my creator, detest and spurn me, thy creature, to whom thou art bound by ties only dissoluble by the annihilation of one of us. You purpose to kill me. How dare you sport thus with life? Do your duty towards me, and I will do mine towards you and the rest of mankind. If you will comply with my conditions, I will leave them and you at peace; but if you refuse, I will glut the maw of death, until it be satiated with the blood of your remaining friends.

–from Frankenstein by Mary Shelley (1818) 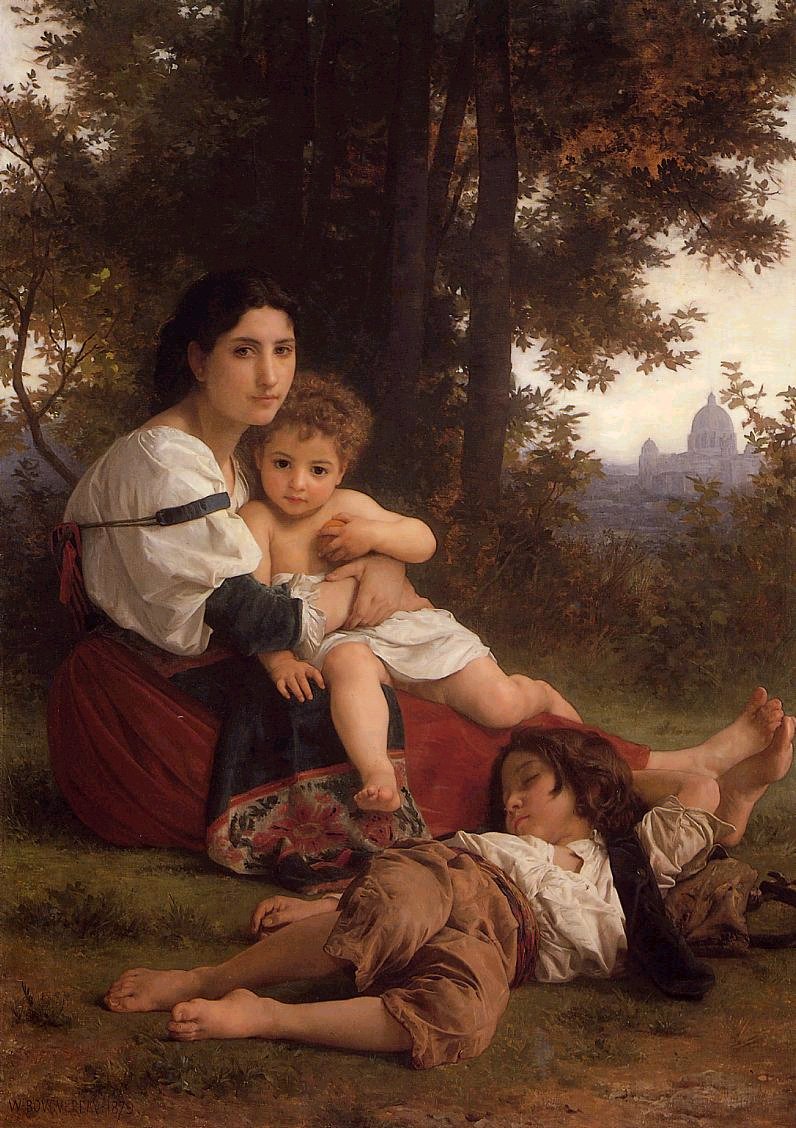 You have to be always drunk. That’s all there is to it—it’s the only way. So as not to feel the horrible burden of time that breaks your back and bends you to the earth, you have to be continually drunk. All earth was but one thought -and that was death,
Immediate and inglorious; and the pang
Of famine fed upon all entrails -men
Died, and their bones were tombless as their flesh;
The meagre by the meagre were devoured,
Even dogs assailed their masters, all save one,
And he was faithful to a corse, and kept
The birds and beasts and famished men at bay,
Till hunger clung them, or the drooping dead
Lured their lank jaws; himself sought out no food,
But with a piteous and perpetual moan,
And a quick desolate cry, licking the hand
Which answered not with a caress -he died.

Paul Cézanne "Couple in the Garden" aka "The Conversation" (1873)

If still you think me mad, you will think so no longer when I describe the wise precautions I took for the concealment of the body. The night waned, and I worked hastily, but in silence. First of all I dismembered the corpse. I cut off the head and the arms and the legs. 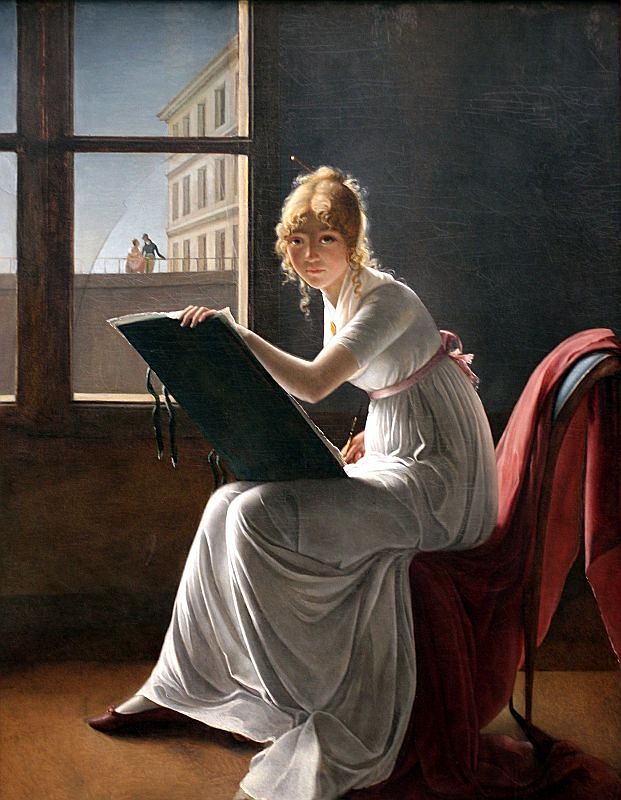 ‘Twas brillig, and the slithy toves
Did gyre and gimble in the wabe;
All mimsy were the borogoves,
And the mome raths outgrabe.

A THROW OF THE DICE NEVER, EVEN WHEN TRULY CAST IN THE ETERNAL CIRCUMSTANCE OF A SHIPWRECK’S DEPTH, Can be only the Abyss raging, whitened, stalled beneath the desperately sloping incline of its own wing, through an advance falling back from ill to take flight, and veiling the gushers, restraining the surges, gathered far within the shadow buried deep by that alternative sail, almost matching its yawning depth to the wingspan, like a hull of a vessel rocked from side to side 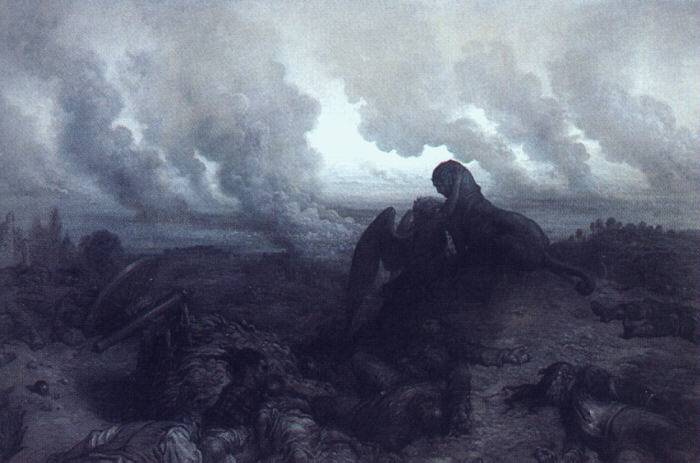 The beautiful appearance of the world of dreams, in whose creation each man is a complete artist, is the precondition of all plastic art, and also, in fact, as we shall see, an important part of poetry. We enjoy the form with an immediate understanding; every shape speaks to us; nothing is indifferent and unnecessary. For all the most intense life of this dream reality, we nevertheless have the shimmering sense of their illusory quality: That, at least, is my experience.

–from The Birth of Tragedy by Friedrich Nietzsche (1872)