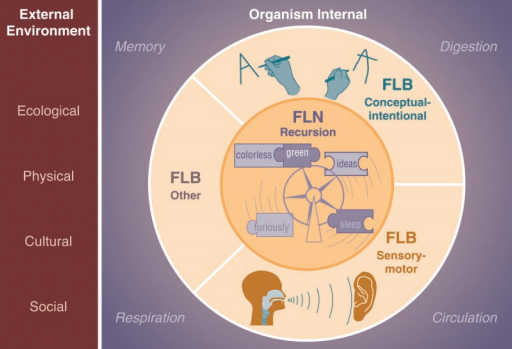 Everett states that “Pirahã culture severely constrains Pirahã grammar in several ways,” which can be boiled down to the “restriction of communication to the immediate experience of the interlocutors.” (Everett 2005: 622) This seems to indicate that Everett aligns himself with the Sapir-Whorf hypothesis, which in the strong form argues that the structure of language ‘shapes’ the structure of perception (Majid et al 2004). I want to consider this implication in the bilingual context. fMRI studies show that, even if bilinguals are only working within one target language, they automatically activate related words in the non-relevant language, leading to language conflict (van Heuven et al 2008). This indicates that bilinguals3 do not utilize separate representations for each language, meaning that the languages have an effect on each other. Thus, Everett’s findings may be relevant with respect to the Sapir-Whorf hypothesis, and this proposal will focus on this potential relevance.

If language does in fact have an effect on perception (Kay & Kempton 1984), and if in fact bilinguals do not have separate representations but map both languages onto a lexical continuum— resulting in slower lexical access but higher executive control (Emmorey et al 2008) —then one would imagine that a Pirahã-English (P-E hereafter) bilingual’s performance with respect to, say, embedded English clauses could be affected by their native Pirahã, and that this performance would not only be constrained by language conflict (van Heuven et al 2008) but by the lack of recursion in Pirahã. It is unlikely that test subjects of this nature exist— Everett even says that the “Pirahã continue to be monolingual after more than 200 years of regular contact with Brazilians and other non-Pirahã” (Everett 2005: 622) —but disregarding that, Pirahã linguistic constraints could be predicted to operate on P-E bilinguals, if they existed.

Everett claims that one example of the ‘immediacy’ constraint he discerns in Pirahã cognition and language is the Pirahã’s skeletal kinship system. He in fact states that “[i]t has perhaps the smallest kinship system ever documented.” (Everett 2005: 621) The Pirahã have a single word, [màíʔì], which is used as ‘parent,’ since both mothers and fathers are deemed such. The Pirahã also appear not to keep track of kinships more distant than siblings (ibid.). To test whether this phenomenon arises from a culturally-constrained effects on language which result in a ‘gap,’ I propose a study investigating P-E bilinguals’ performance when presented with an English-language family tree. The design would be simple: the participants would be asked questions such as “how is X related to Y?,” etc., seeking to elicit English responses such as “X is Y’s uncle’s mother,” etc. 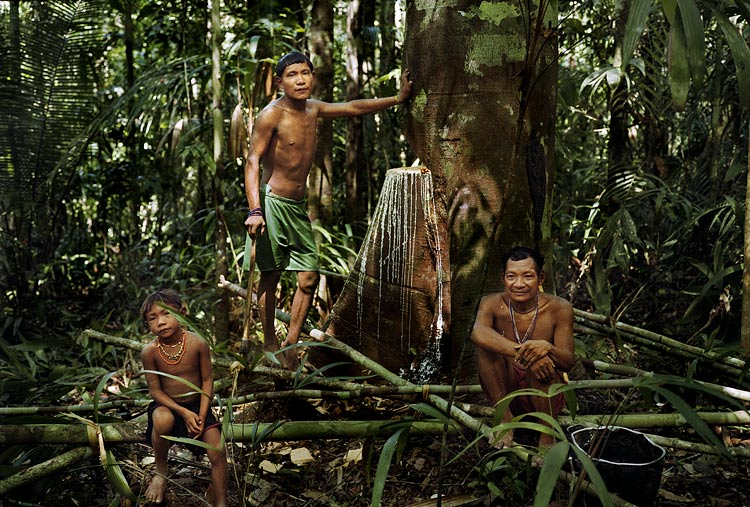 Image courtesy of this blog.

Should the P-E bilinguals fail to be able to express the kin relationship between X and Y with English embedded clauses, then Pirahã grammar strongly constrains the subjects’ performance in English: this would corroborate the Sapir-Whorf hypothesis, since if, as Everett claims, Pirahã culture ‘molds’ the Pirahã language, then Pirahã culture also ‘molds’ cognition and performance in the English context.4 However, I predict that the speakers would be able to express the embedded clauses with little difficulty. As aforementioned, there is no lack of expressive capacity in Pirahã (Everett 2005: 631), so it can be assumed that this kind of extended kin relationship is in fact expressible in Pirahã through other discursive techniques, even if the constructions might be circuitous and awkward. The lack of elegant expression for such a distant relationship points to its irrelevance in Pirahã culture, but a P-E bilingual should have no problem with English embedded clauses because, as HC&F point out, FLB contains “the computational mechanisms for recursion,” so a lack of recursion in Pirahã does not indicate a lack of these conceptual mechanisms, only their non-use.

A P-E bilingual should therefore have the capacity to use English embedded clauses even if such mechanisms are not employed in Pirahã, and if van Heuven et al’s fMRI findings are taken to indicate a unified cognitive representation of the bilingual’s languages, this means that the potential for embedding is in fact present in the Pirahã speaker’s mind. If the P-E bilinguals were to in fact produce English embedded clauses with no difficulty, then further investigation regarding reaction times could begin. If it is clear that Pirahã’s lack of recursive clauses does not preclude use of English embedding, then reaction times between presentation of the kinship question and participant response could provide insight into the cognitive process underway: one would expect longer reaction times (Emmorey 2008), since, as van Heuven et al’s fMR studies indicate, the P-E bilingual would be activate non-relevant, non-embedded Pirahã clauses as s/he is attempting to formulate a relevant English response. Then again, if these kinship relations do not exist in Pirahã, would novel, pragmatically-questionable constructions in the non-relevant language actually activate in their minds? This is a paradoxical and unproductive question, for now. Using a control group of subjects bilingual in English and another language which contains embedded clauses, the reaction times of the P-E bilingual group could be compared to those of the control group, and if the former’s reaction times are slower, this would indicate that P-E bilinguals are not only encumbered by the slower lexical access which affects all bilinguals, but by other constraints specific to Pirahã.

Morris Halle and Noam Chomsky holding a 1988 picture of them holding a picture taken of them in 1951. Image courtesy of MIT.

The P-E bilinguals’ ability to produce English embedded clauses, along with Abe and Watanabe’s study with finches, indicates that recursion is not specific to human languages and may have in fact developed analogously in different spieces. Clearly if the Pirahã are able to communicate efficiently and expressively without recursion, and if finches can comprehend recursive hierarchical structure, then recursion is not a distinguishing or necessary feature of human language, and if recursion is not in fact the crucial defining property of human language, then we must reconsider its role in the evolution of the language system. (Everett 2009, Parker 2006) We share much more cognitive machinery with non-human animals than we suspect, and therefore further research, necessarily comparative and interdisciplinary in nature, should consider other distinguishing features of languages, features which Pirahã shares with all other languages— syntactic category, for example, or the syntax-semantics interface (Pinker & Jackendoff 2004; Van Valin, Jr. 2005). Animals such as finches and starlings have been shown to possess recursive capacity, and vervet monkeys have been shown to possess semanticity in their innate vocabulary of calls, but no animal has shown the same marriage of the two that humans have (Kinsella 2010).

1 Recursion, to be distinguished from simple iteration, is a process one step of which involves invoking the entire process— consider factorials. The most common example as regards human language is recursion of categorical representations: in English, for instance, one can embed NP’s inside other NP’s an arbitrary number of times, the only constraints being pragmatic or physiological (memory, breath, etc), which can yield, say, an infinite (in principle) string of genitives: Mary’s mother’s brother’s father’s sister’s uncle’s best friend’s car.

2 As well, Gordon 2004, Frank 2008 have demonstrated that the Pirahã may lack a number system, instead employing morphemes that seem to act like broad comparatives (‘more, fewer, less,’ etc).

3 This proposal defines ‘bilingual’ as a person who in their critical period simultaneously acquired fluency in two different languages, but allows for frequncy asymmetries as well as preferences for the non-English language.

4 (by basic application of the transitive property)

Mithun, M. “How to avoid subordination.” Proceedings of the Tenth Annual Meeting of the Berkeley Linguistics Society, 1984 (pp. 493-509).

Okanoya, K. “Sexual display as a syntactic vehicle: the evolution of syntax in birdsong and human language through sexual selection.” The Transition to Language. Ed. A. Wray. Oxford: Oxford University Press, 2002 (pp. 46-64).

Parker, A. R. “Evolving the narrow language faculty: was recursion the pivotal step?” Proceedings of the 6th Annual International Conference on the Evolution of Language (pp 239-246).

Manuel Arturo Abreu is a poet based in Portland and nyc. Read more of their work at http://twigtech.tumblr.com/ and @Deezius