Welcome to the third installment of my new series: Reading Comics. I’m excited to report that I’ve got a bunch of great contributors lined up, and am myself working on a few entries. If you haven’t contacted me yet, but would like to participate, email me and let me know! Without further ado….here’s Bradley Sands…

I am 32-years-old and I have been reading comics since I was in elementary school. Although I enjoy “alternative comics,” the kinds of comics that intrigue me the most are the mainstream superhero comics  published by Marvel and DC Comics that I’ve read off and on since childhood. Although the idea of superheroes excited me when I was young, they no longer have this effect on me. But what intrigues me about the comics being published by these two companies are qualities that no other narratives share (except for perhaps soap operas to a small degree, although I find them unwatchable).

Marvel and DC have released various comics each week for many decades. When the stories of each different company are combined together, they become two ongoing all-encompassing serial stories that began before we were alive and will likely continue after we are all dead.

Novels and films usually lack the ability to tell satisfying stories of a serial nature. You usually have to wait years between each novel or film for the next book or movie sequel (which usually sucks) instead of waiting one month for the next issue of a comic to come out. Enormous fantasy novels are often part of a series but I dislike these traditional kinds of fantasy books. Authors of fantasy series sometimes die before they get the opportunity to finish their stories and different authors occasionally take their place. I can only assume the readers find the books of the pinch hitters unsatisfying considering they’ve already read multiple novels (usually pushing the length of a thousand pages) from the same author, have grown used to the deceased author’s writing, and find the new author’s work unsatisfying because of it. While with superhero comic books, there is almost always a constant rotation of writers and artists on each title so the readers are used to new writers continuing other authors’ stories.

Television shows with serial stories are the closest thing to comic books considering new episodes come out each week until the season ends for each series and the viewers need to wait months for the show to begin again with the next season assuming it gets renewed for an additional session. Comic books titles share the danger of being cancelled, but when a story gets interrupted by a title’s cancellation, there’s still a chance the story will be continued in a different, ongoing comic. I am in love with the serial narrative and watch entirely too much television because of this, but comics have something that television shows lack: the stories of Marvel and DC each occur in a distinctive shared alternate universe.

Although intriguing, let’s ignore the concept that the majority of the shows on TV are being imagined by an autistic kid from the series finale of St. Elsewhere, a concept originally conceived by deceased comic book writer, Dwayne McDuffie. While the connections between television shows are tenuous, the connections between comic titles are solid and widespread. If something significant occurs in an issue of a Marvel or DC comic, it will most likely have an effect on every other comic title that the companies publish. Because of this, editors must devote a lot of time to keeping up with what is going on in the comics that they not edit. Editors are the ones who keep the immense comic book universes functioning. While an editor of a novel must check a single book for continuity errors, comic editors do the same, but lack the luxury of only focusing on a single book. Because of this, errors do sometimes occur. Also, events that occurred long ago in the past are occasionally changed to suit the purpose of a new storyline. The term that is used to describe this is “retconning.”

Due to the all-encompassing nature of the storylines in a comic book company’s universe, comics are often inaccessible to new readers. One of the first comics that I bought was an issue of Uncanny X-Men. I tried to read it, but it was completely nonsensical to me. Because of it, I didn’t read another comic for a few years. During my next attempt to get into the medium, I tried reading an issue of Uncanny X-Men for the second time. And although I found it confusing, it was not as confusing as my initial exposure to the comic, so I became determined to make sense out of the title. To do this, I began to read the comic on a monthly basis. And months later, I was able to understand most aspects of the story and it became my favorite comic.

(This was during the nineties when Chris Claremont was writing the title near the end of his run. I would highly recommend reading the issues that he co-wrote with John Byrne during the seventies, which are far superior. They have been collected in the Essential X-Men books, which are cheap, phone book-sized books that reprint tons of issues on cheap paper in black and white to save on printing costs.)

Marvel and DC Comics occasionally attempt to make their comics more accessible to new readers. Last month, DC went through the most radical strategy of this kind: they cancelled all their comics except for a few of their flagship titles (although those comics were assigned to new creative teams), launched new titles, and renumbered everything so each issue started from “the beginning” with issue number one. In addition to the renumbering, they may have also started the stories of their universe’s superheroes over from the beginning, but I am not 100% certain of this.  There was a major event called Flashpoint that altered reality to make it this way (DC tends to do this every few years, although the title of the events usually include the word, “Crisis”). I’m not entirely aware of all the changes that have been made, but I do know that Grant Morrison will be writing modern-day versions of the early Superman stories (but not a retellings of them) in the Action Comics title. While the comic, Superman, tells stories that “seemingly take place later in the character’s timeline.” I have read a few of “new” comics and haven’t been impressed, but it’s only the beginning of the second month of after the change so hopefully the comics will improve in the future. Despite that, DC Comics may be destroying their rich heritage with such a significant change.

A little more than a decade ago, Marvel Comics also carried out a strategy of this kind. Unlike DC, I feel they were highly successful. I am referring to the founding of Marvel’s “Ultimate” line of comics, which continues to this day. The imprint only consists of a few different monthly titles, along with the occasional publication of a miniseries. Back in the early days of the imprint, its first monthly titles were Spider-Man, Ultimate X-Men, Ultimate Fantastic Four. Similar to what DC may be doing now, the comics began by retelling the early stories of their characters in a modern-day setting, which were essentially cover versions of original storylines (along with publishing new storylines and using an entirely different history than the main universe). Basically, writers who were superior to Stan Lee and Jack Kirby (but perhaps not superior “idea men”) rewrote Stan and Jack’s early stories and extended their length.

The publication of the Ultimate comics created an alternate universe that was separate from Marvel’s primary universe. Its comics contain characters who are different versions of their counterparts from the primary universe who often interact with each other in their different titles. The characters from the two universes have never come in contact with one another and the events of each universe has never affected the other. The Ultimate universe is also much “smaller” than the primary one considering the small amount of comics the imprint publishes and its smaller cast of characters. The Ultimate universe seems like a condensed, collage version of its larger counterpart.  Because of its more compact nature, I find the Ultimate universe a lot more intriguing than the primary universe. It is also a lot easier to follow what is going on with such fewer comics to read. The universe is also very similar to the “universe” of the Marvel Comics movies. A notable indication of this involves the character, Nick Fury, who may be the most significant character in the Ultimate universe even though he has never starred in his own Ultimate comic. He is drawn to look exactly like Samuel L. Jackson, who plays the character in the movies. 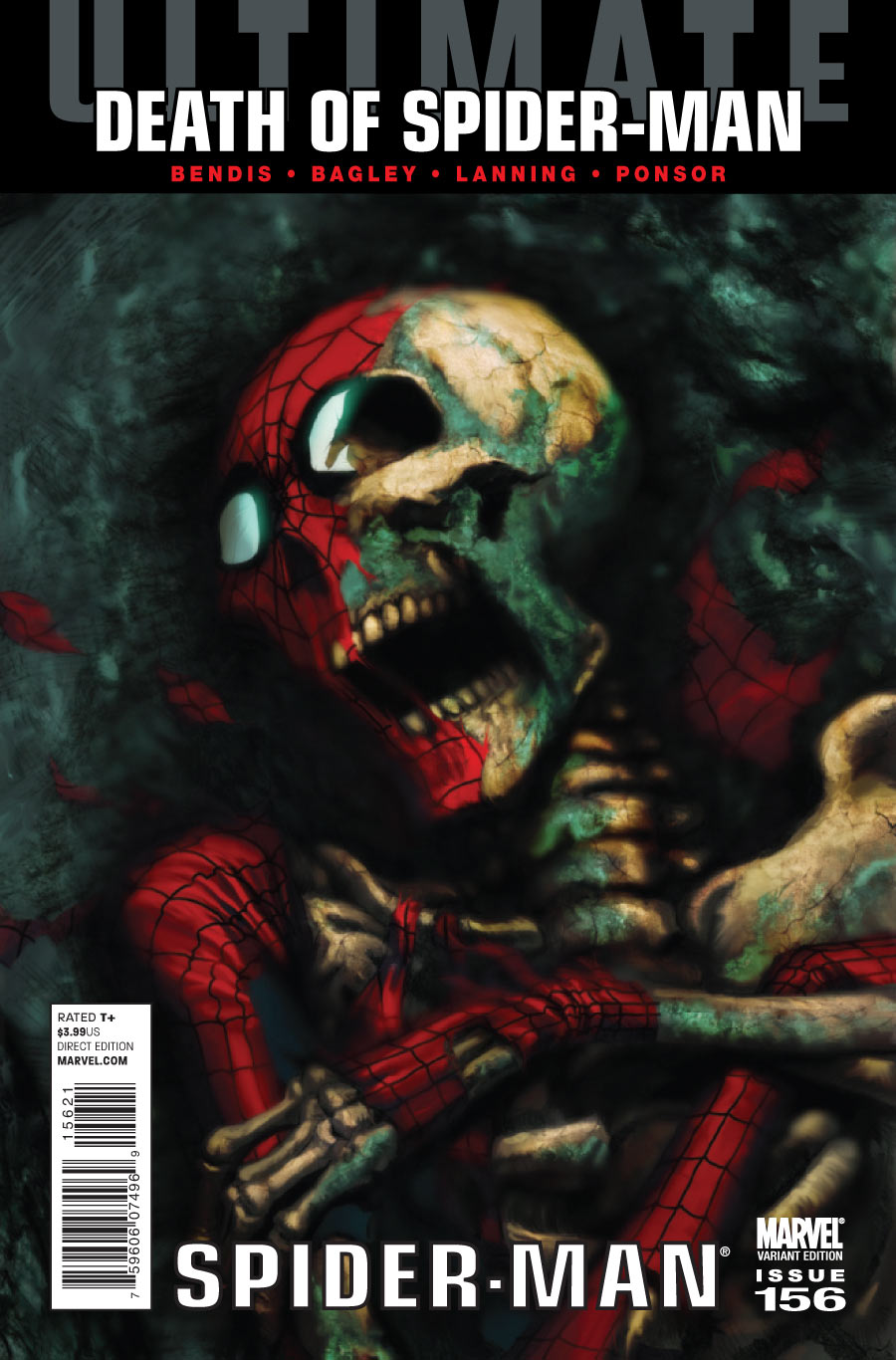 Like DC’s comics, the Ultimate imprint hasn’t been immune to “relaunches.” From 2008 to 2009, it published a mediocre “event miniseries” called Ultimatum which resulted in the deaths of many different superheroes and villains (although many were minor characters who rarely appeared in the comics). After the series’ conclusion, Ultimate Fantastic Four and X-Men were cancelled while Ultimate Spiderman was renamed Ultimate Comics: Spider-Man and renumbered to start with issue #1. In addition, the imprint published various miniseries after the relaunch, with Ultimate Comics: Avengers being particularly notable for its high quality. And recently, for some incomprehensible reason, the Ultimate imprint did a second relaunch (perhaps due to the death of Peter Parker, whose super hero identity has since been taken by a new character). Now the imprint has just started publishing new volumes of three ongoing titles including Spider-Man, The Ultimates, The X-Men. In addition, they are publishing a solo Hawkeye miniseries (the character is a member of The Ultimates and if you saw the Thor movie, you saw the character for about three minutes—he will get much more screen time in the forthcoming Avengers movie).

Out of all the comics the imprint has published, I feel Ultimate Spider-Man is the best. It creates something very distinctive by combining mainstream superhero comics with alternative slice-of-life type of comics. 133 issues of it were published before the series was recently relaunched with a new character inside the costume.

Ok, so I got a bit sidetracked and basically turned this entry into an advertisement for Marvel’s Ultimate imprint, but getting back to what I was talking about in the first place: Marvel and DC comics offer writers and readers the opportunity to participate or witness a unique kind of storytelling (although it unclear what the future holds at DC and if this sentence will remain the truth in reference to their comics).

If you read or write a novel or story, you lack the ability to become engrossed in an immense, alternate universe such as the ones that the creators and editors of Marvel and DC have built throughout the years. Many people have called the publishers’ comics “modern day mythology” and there’s a lot of validity in this idea. But it is also problematic consider this “modern day mythology” is restricted to the minority of people who read (and write) the comics published by the two companies while storytellers throughout the ages have told ancient mythology to audiences of far greater numbers. And unlike comic book readers, perhaps these audiences believed that gods and heroes of the stories once walked the Earth. But maybe, sometime in the future, the world will suffer a nuclear armageddon and the only gods the survivors will believe in will be comic book icons like Superman and Wonder Woman.