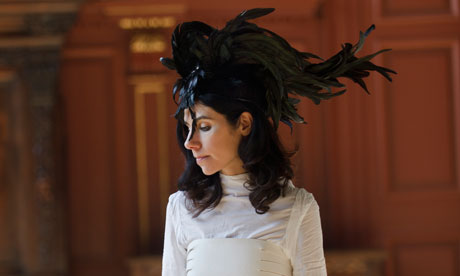 A lovely article/interview with PJ Harvey in which Harvey reveals nothing and everything about life-in-writing-and-song to Dorian Lynskey. Also, Harvey recommends some of her favorite poets. I am watching tennis. People lose. They seem crushed. Matthew Simmons just wrote about, among other things, an article that wrote about an abortion. Which is funny, because I was thinking about the removal of things (which is different than a crushing of things, but I am super digressing here non-stop), from reading a short story called “Mirrorball” by Mary Gaitskill, (quote after the jump), where she discusses the removal of the soul. Which led me to think of “Love Removal Machine” by The Cult, (I always misheard the lyrics to say, “soul stealer” but it is actually “soul shaker”. Oops. Also, I know the 80s shit is hard to deal with unironically, but I love that song.) Which led me to think of how I also always thought that this song, “Naked Cousin” contained the lyrics, “He’s Ronny”, like that was his name, the name of PJ’s cousin, but no, it’s “He’s running”. Oops again. END_OF_DOCUMENT_TOKEN_TO_BE_REPLACED