NOW AVAILABLE for preorder: The Weather Stations by Ryan Call

I’ve been waiting for this one for a long time and it is finally here: Available for preorder now from Caketrain for only $8, or together with any of Caketrain’s beautiful single author editions for $12.

END_OF_DOCUMENT_TOKEN_TO_BE_REPLACED bearing the cross -- for you

END_OF_DOCUMENT_TOKEN_TO_BE_REPLACED

1. Cleaned out under my fridge today and found a fillet knife, dust-gorillas, and a chapbook. It is called “thunderstorms as familial convulsion.” Ryan Call as good as any at using weather as something more than weather.

2. Made me think of this sonnet by Kathleen Kirk. It is “Roof Leaks, Mimi Calls.”

All across the city the tyrant ice
pries up the tar and flashing, disturbs the peace
of shingles, their social order. It’s not the freeze
but the thaw that ruins us, the sudden spies
wiring the closet walls with new secrets,
the trickle-down effect in our kitchens,
cups and buckets competing for attention,
disintegration: sheetrock into dust.

The phone rings, your mother with the news.
The ceiling shifts, sure it wants to open.
Nothing falls, not even the sky.
Your voice is like a level, its yellow tube
tipping the bubble of air toward hope
and back. Cancer—just another tyrant.

4. I have decided those who get bothered about quotation marks bother me. Dialogue isn’t about those little cheese curls. Do it right and you won’t have to do it right anymore. 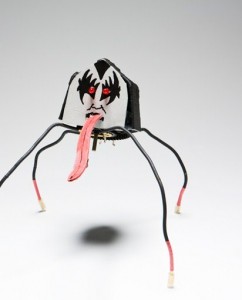 Baltimore’s City Paper is currently running a series of short story reviews in 60 words or less. It’s insanely difficult to try to capture something that briefly. I’m not thrilled with my encapsulation of Giant contributor Ryan Call’s story “I Pilot My Bed Deep Into the Night,” which appeared in Keyhole 7, but what the heck. It was fun trying. Or maybe it was stressful, because I had to keep throwing away words and I thought I was killing his amazing story. Other reviews include a Breece Pancake story from Justin Sirois (who chose to use the expletive “damn” as one of his words), Barry Hannah’s “Constant Pain in Tuscaloosa” by Tim Kreider, and a couple dozen others. Here’s a writer to know: Dambudzo Marechera, covered by Bret McCabe.

I am against everything
Against war and those against
War.
Against whatever diminishes
Th’individual’s blind impulse.

I think the most remarkable review is Jamie Gaughran-Perez’s take on “Hills Like White Elephants,” because he doesn’t shy away from quoting the word “please” for seven of his 60 words. There are 27 reviews in all, which means you can can get mildly familiar with 27 stories and only have to read 1620 words.

Haut or Not: Ryan Call’s office

[Contributor Ryan Call teaches first year composition at University of Houston. He also teaches an introduction to fiction (the reading of/writing about, not the writing of) course as well.] Great, Ezra Pound has something to say about reading. Lay off the Latin Ezra and we’ll be just fine. And check out the 800-ish page “compact edition” of The Literary Experience. What exactly is a literary experience? Putting suntan lotion on pale Sylvia Plath? Removing lice from Tolstoy’s beard? Or just getting rejected by Paris Review? I need answers. Then there’s Ze “bro”ski, senior faculty at U. of Houston, who wants us to “think through theory,” which is like a kid going downhill on a bike with no brakes frantically writing out “3.1415926535…” And what the hell is Rhetorical Grammar? Would, its; — look some-thing like these? [hyperlink ryancall_asszit.jpeg] I bet Professor Call enjoys teaching Teaching One-to-one one-to-one to all those Sophomore girls one semester past that “not so fresh[man]” feeling.  It must be a good pedagogical life.

END_OF_DOCUMENT_TOKEN_TO_BE_REPLACED

Spotted in attic where Gene goes to escape from “the kids” and “the wife,” probably: Target shorts. Pepsi Max in bottles?

Get your own – Open publication

Wow. POCKET FINGER represents a new level of ‘wow, fuck’ from Adam Robinson, the Publishing Genius. Insane and beautiful enfolded images from the clearly new and intricately spare imagery of Christy Call, meshed with bro-for-life Ryan’s knack to meld the everyday of fathers, fishing, and tradition with some tonally-wicked phrasing.

Read the shit out of this.

Next week is MEAN WEEK In the face of all our current praising and cataloging of the good, HTML GIANT is proud to announce now that next week in our hands will be known as Mean Week. I mean, yeah, it’s fun to praise a lot of things, but sometimes you should be mean.

It can’t be all lambs and roses. Mean Week is real.

Ryan Call, you’re going to have to find a way to be mean.