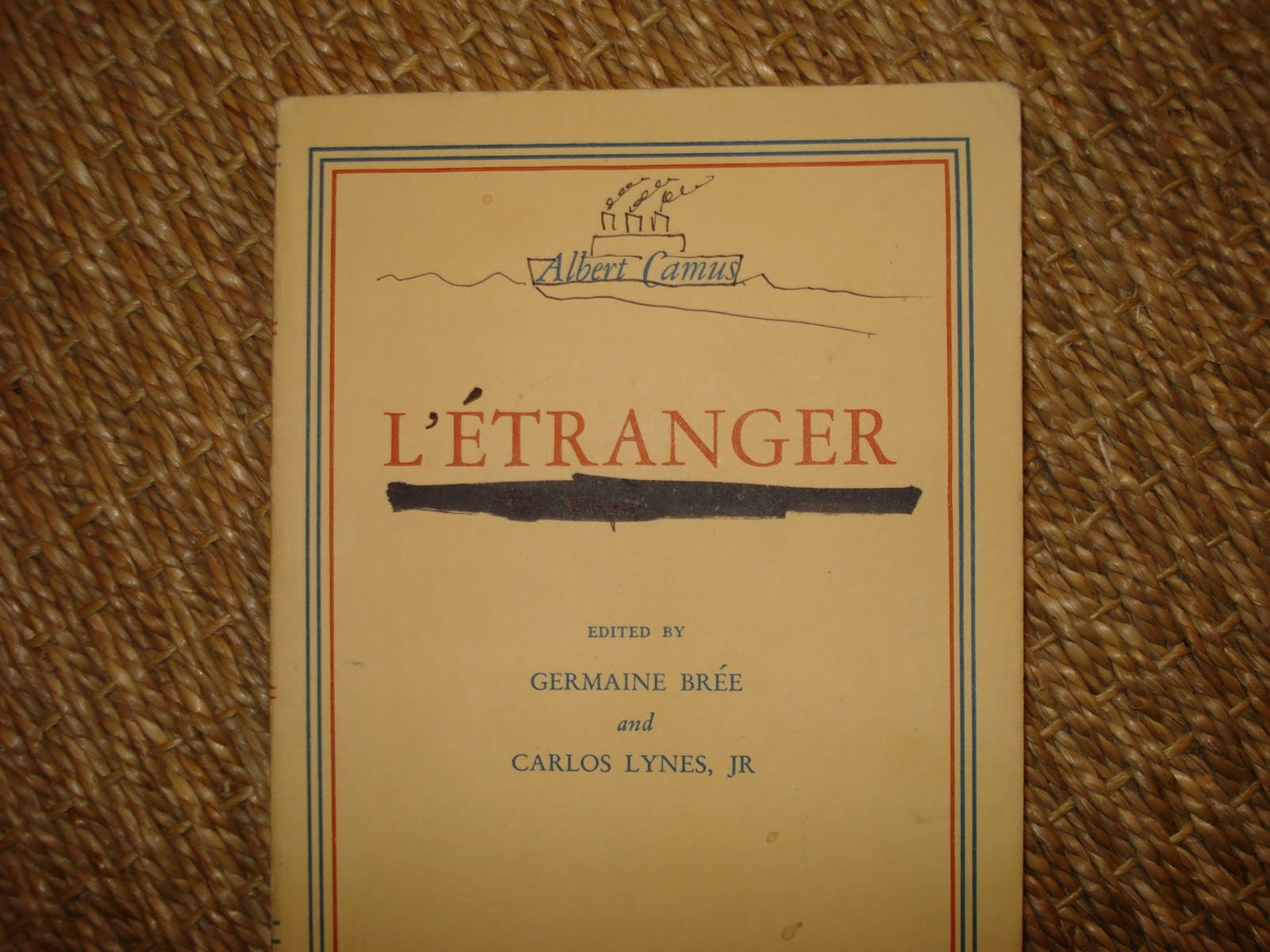 In high school, my French class read The Stranger, and it was one of the most useful activities I’ve ever done to help me learn another language. I’d forgotten about that class until I found my copy of L’Etranger in my bedroom at my parents’ house over Thanksgiving break. I haven’t taken French since my first year in college, but I kind of miss thinking about French and working with it and trying to write and speak it. So I think a great way to try to get some of my French back would be to stumble through this book, translating one sentence a day. I think I could do it? If I remember correctly, the first sentence is something like this: Mother died today. I guess now I can take January 1st off.

I hadn’t much thought about diagramming sentences since 7th grade, but then I read Alexandra Chasin’s Kissed By, in which an entire story is presented in a series of sentence diagrams. I think sentence diagrams are very interesting: written language, already a visual representation on the page or screen, is further broken down into its components. When one diagrams a sentence, one analyzes the sentence, moves words around into precarious positions, inserts little support beams beneath the words to strengthen their temporary situation. It’s sort of like a scaffolding that allows you to do repairs or to perform an inspection for a short amount of time. Then, when you remove it all, the sentence returns to its natural, pristine state. I’d like to try to diagram a bunch of my favorite sentences from my favorite authors. I think this would be a new way to further look at turns of phrase that I admire, and this would be a great way to learn a bit more about the language I use to write my stories.

I would like to start a motorcycle blog about urban riding and update it with stories about my commute. In Houston, I ride almost daily to and from campus, and I have thought a lot about how sharing that experience with a readership, especially a readership of nonriders, could improve just a little bit urban drivers’ motorcycle awareness. The trouble, however, is first getting that readership, for without it, the blog is meaningless. I haven’t found many blogs that specifically address urban riding, though there are plenty of excellent blogs out there, Bill Dwyer’s Atlas Rider being, in my opinion, the best. I think if I could somehow take what he does and shift it a little, then I might have something worthwhile. I’ve thought about this project for a long time, but haven’t yet gotten around to doing anything about it. Most likely, I’ll continue to think about it. Thinking is easy.

I would like to join a dart league. I feel like, on my better days, I can throw one triple 20 for every three darts. I have, on my better days, doubled up 16 fairly consistently, which is great for my 301 game. I feel like, based on these performances, that I could do okay in an entry level dart league. However, these performances happen rarely. So, I probably need more practice before I embarrass myself in public, as I think I probably struggle to average over 50points per round in 301. I want to practice darts once a day for thirty minutes.

I’d like to teach Memphis how to catch a disc one day. This is a good goal I think, as it will give him some exercise and get me out of the house. He’s way too young to do any of that now. For now, maybe, I’ll just work on housetraining him. Also, this is just an excuse to post a picture of my puppy.

I can list a few more I suppose, but I feel like these were the big ones that I’ve been thinking about lately, and I worry about oversharing personal stuff here. But really honestly, I have to say that just thinking about these goals makes me happy. I like that there is potential here, that there are things I can always try to accomplish if I find myself struggling elsewhere. And sometimes these projects help me refocus on the bigger things: my marriage, finding and maintaining a source of income, writing and writing and writing. So, feel free to post your own unique/doomed goals, and good luck in 2010 to all you HTMLGIANT readers. Thank you for reading my post.