Absorbing all of these spaces, I think, is the room displayed in the credit sequence of INLAND EMPIRE, the room where ‘Rita’ appears and sits and watches the logger cutting, the singing man, an Asian woman wearing a Laura Palmer-esque wig, the dance crew’s insanely mesmerizing performance of Nina Simone, and various other Lynch-pins, if you will, creating a kind of den within the film within the film, an anterior both to the Black Lodge and a space that operates for me as the crown and blood of the whole film, which seems interesting, in that it is used for the viewer as an exit, a segment that is usually walked out on, and also contains all the scrolling names of all the human bodies used to ‘create’ the film itself.

Also interesting is the hilariously off-putting and seemingly out-of-place (and therefore perfectly in-place) last bit of ‘actual film dialog’ that serves as a ‘key to the door’ of the sequence, a sex-rasped “Sweeeet.”

At the same time, it is these rips, these collusions and things not quite seen, but only hinted into what is not contained by the film, that give the film its sickening power.

Take, for instance, the ‘urban legend’ style discussion of what could be the presence of Laura Palmer in the Club Silencio scene of MULHOLLAND DRIVE (see this amazing post ‘Laura Palmer in Club Silencio?’, linked from the definitive MD fansite, which contains an incredible map of the spaces of the film, and a self-defeating crowd of theories, discussions, etc.) Whether or not that actually is Sheryl Lee, there is something about the thought and the residue of this contention, and then underlying ‘unspokenness’ of it, that makes my whole body go rubbery.

[That I am writing all this down while someone is under my house banging with hammers, and the water is turned off, and in a half light through turquoise curtains, is quite right.]

These connective rooms, this blank space, space filmed and not filmed, the antithesis of the actual connectivity which instead then creates actual terrain not on the film and therefore somewhere else (where?): these are what make the body of the air milked in the Lynch rooms so full of and empty of light at the same time. The question of process in Lynch’s creation/tapping of these spaces I think is directly related to his process and mental openings, which is another discussion in itself. The connected disconnected. The unintentionally intentional. The accidental right-there.

Certainly, as well, Lynch’s affinity for lighting, electricity, doors, curtains, specific foods: these are organs in the massive body.

All of this is stirring me, as it does most does in waking and nonwaking, even more so in the light of the book I am currently exactly halfway finished with, The Other City by Michal Ajvaz, which was released in 1993 in Czech and was recently rereleased in English from Dalkey Archive Press. 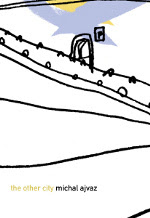 From the copy on the book: The Other City is a guidebook to this invisible, ‘other Prague,’ overlapping the workaday world: a place where libraries can turn into jungles, secret passages yawn beneath our feet, and waves lap at our bedspreads.”

I read the first half of the book yesterday (exactly, to the page), and will read the second half tonight, and yet feel more equipped now to write about it in the context of the above than perhaps if I had finished.

Essentially, The Other City begins in a book shop, with a man finding a book among the others pressed, purple, full of a ruinic writing he has never seen. At first he glances, puts it back, but then returns and buys the book, and in his exploration of the text and its aura’s effect on his mind, finds himself on an unraveling inquest to a world that the book seems to be a cursor for (much in the way of the blue cube fro MD): a world contained between all the blank places among the everyday that most people overlook.

For instance, of these places, at one point the narrator finds himself, while walking along an old path, confronted by a sizable topped-off cylinder stuck in the ground, which he remembers having, as a child, hidden behind. There is a rusted stove door on the cylinder that he remembers having never been able to pry open, but in his coming across it now, it opens, large enough to stick a head in. Inside, in a strange light, he comes across a man delivering a strange sermon to a large congregation, discussing their unconscious exile from the city.

Among the long, strange-logicked speech, the man says something that in some way seems to refer to the nature of the craft I only hinted at above:

Why doesn’t he choose another typewriter? All the other typewriters have disappeared: some have been borne away to the Caucasus by a swarm of locusts (it is proven that, by joining forces, locusts are capable of carrying even a horse many miles), some typewriters are used as part of some kind of new perversion spreading through the cities, and some have been transformed into the white light illuminating the statue of the beautiful animal angel.

Later, when the narrator returns to try to get into the cylinder again, the door will no longer open.

The space of this room, and the other-logic of it (amazingly rendered in Ajvaz’s post-Kafka, hyper-hyper-aware prose), feels much like, and perhaps even embedded in or connected to, the rooms and spaces Lynch is able among our human lights to absorb.

The walls and beings of these spaces and these people, for Ajvaz, like Lynch, are right there among the everyday items and connectors we assume are ‘just things’ (a railway leading to the titular ‘other city’ runs through the heart of the ‘everyday’ town here, but is considered an old line, outdated, and is therefore not questioned, nor are the presence of these strange green shuttles that are said to appear in the city’s art, always there).

Though in Ajvaz’s spaces, the temper is even more, or at least differently, fantastic: sharks swim in snow, massive flower ceremonies intersect with ski lifts that intersect the the city; strange animal (tigers, bears, dogs) monsters that interact with humans; humans who seem clear on distinguishing themselves politically from the unknowing others, whereas in Lynch, the hidden peoples are murderers, rapists, loons.

The menace, though, in both looms hyper-real, to the point that it seems more real even than telephones or waking. A blood lymph laid around the everyday.

People with any experience of the ‘Other City’ in The Other City are continually interrupted, distracted, afraid.

Some anagrams for the phrase THE OTHER CITY: Itchy Thereto, Etch They Riot, Octet Heir Thy, Rich Teeth Toy, Retch Yet Oh It, Cry Eh Eh It Tot. 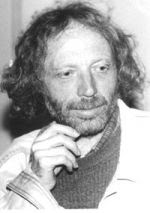 The T-bar dragged me up cold, dankly-reeling staircases of houses, lit by solitary light bulbs. I passed through dim hallways into a lobby. I shouted out when a figure suddenly appeared in front of me, but it was only my reflection in a big mirror above the shoe rack. I moved through the corners of bedrooms where people lay asleep. A man and a young woman were making love on a wide white bed; the girl heard the clatter and turned her head toward me, silently staring me in the eyes until I disappeared behind the closet. I was traveling through the interspace between the apartments whose existence is denied.

[Such that, now that the banging in my house where I am writing this is silent, and the water has returned, I feel stranger now than when it had been gone.]

And such that, as I wait in this null space between halves of finishing my reading of Ajvaz, the doors seem even more open, looking, oh.]