Here’s a stray line from Mary Millsap- “Life means submitting to life, but a soldier is less an individual than a fragment of time.” 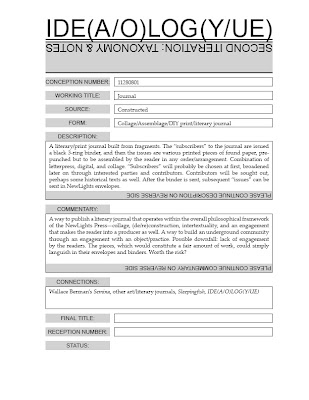 NewLights Press (Oakland / Baltimore) – “The New Manifesto of the NewLights Press, Now Newly Manifested,” AND “Lucky, Or, The Unstoppable Epic Poem of & In Spectacular Culture (difference & repetition mix).” These guys had some of the baddest-ass-looking books at the whole fair, and since their orientation seems to be heavy critical theory / philosophy, I guess that makes them academic vixens–the kind of girl you want to stay up ALL NIGHT drinking coffee and reading Derrida with. From the Manifesto: “The repetitive structure of the book, of its reading, undermines its own progression, nullifying and occupying time at the same time. The active dismantling of narrativity, the exposure and subversion of its workings, is one of the most effective ways to break open the book.” Of course, that assumes that “breaking open the book” is a goal of yours–or theirs, in this case, which I guess it must be or why would they be talking about how to do it? The other thing, “Lucky,” is a collaboration between NewLights and Britney Spears. DJs Melissa McGurgan and Aaron Cohick of NewLights took Spears’ song “Lucky” and looped it to fill an entire CD. It’s like meditative chanting in the 9th circle of hell, or the soundtrack at Guantanamo. Good work, guys!

Book Thug (Toronto) – These guys were sitting on the side of me that NewLights wasn’t on. They had a whole brigade of student volunteers working at their table–I couldn’t quite figure out they pulled that off–and were selling dozens of books. I found it frustrating that the actual BookThug guy wasn’t there, because the students didn’t feel authorized to barter with me, though one of them said she graduates college next week so I gave her a free Agriculture Reader. Anyway, I parted with ten of my own American dollars for a copy of “Us Them Poems” by Evan Kennedy, because I remembered very much enjoying his work when I encountered it in vehicular a while back. “Us Them Poems” is a collection of prose blocks. “We soothsayers walk the line the line in our minds and arrive in a town where a flood has receded. Our skin as cold as clay our bodies wrapped in linen.” And so on.

The Cupboard (Lincoln, Nebraska) – The Cupboard is a quarterly pamphlet that publishes one writer per issue. The issues are small enough to be mailed in a greeting card envelope. And they are. The new issue, “Play,” is by Mathias Svalina. It is a collection of directions for children’s games. “Face Leaf (for 6 players): Each child begins his or her life as a tree. While they are still able to move, the children make a circle near the city hall building. The teachers water the children’s feet every day until they root into the dirt…”