Winners of Sam Pink’s Book! And Everyone Who Entered Was Awesome!

And the winners are……………..Kendra Grant Malone, Brandi Wells, and Rob. We hope Rob is the same Rob  who entered twice. Honestly?  I wish Barry could send each and every one of you who entered a Sam Pink book because you are all great. Thank you Htmlgiant readers! We love you. Winners- send your address to peterrutt@live.com to get your copy of I AM GOING TO CLONE MYSELF THEN KILL THE CLONE AND  EAT IT by Sam Pink.

Win Sam Pink’s book, I AM GOING TO CLONE MYSELF THEN KILL THE CLONE AND EAT IT!!!! 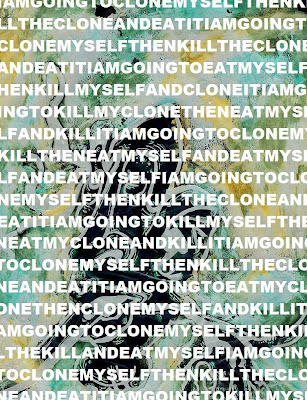 Htmlgiant and Paper Hero Press are sponsoring a contest to win Sam Pink’s I AM GOING TO CLONE MYSELF THEN KILL THE CLONE AND EAT IT!!!!!!! We are giving away THREE COPIES to the best entries! Here is the contest, people: Give us your best description of a fight that made you physically ill in 50 words or less. Enter in the comments section,(you can enter more than once and you can make shit up). Barry Graham, the publisher of Paper Hero Press, Sam Pink himself, and yours truly are the judges. Barf vomit blood and tears people. We love you.

Sam contemplates death, bones, violence and blood often in his book. That said, here’s a quote from the book that isn’t like that:

When You Are Happy Do A Handstand

When you are happy do a handstand and step into the sky. Go knee-deep. And push your feet through the depths. Start thinking about where the bottom is and what it feels like and if you’re not too stupid or scared to touch it.

(Full disclosure: I offered to cuddle naked with Sam Pink at the AWP in Chicago a week or so ago (even though I wasn’t there), but he declined. Then, it turned out it wasn’t Sam Pink. It was Mary Gaitskill.I was wicked drunk.) I don’t think it’s unethical to say some words about Sam Pink’s forthcoming first book on here, even though Sam writes for the site. I have been salivating for someone to release a Sam Pink book for a while now, and finally the newly fashioned and surely balls out Paper Hero Press, run by Barry Graham and Peter Schwartz.

I mention it now because they just put up a preorder link for the book. It is $12 worth spending. I would say more about what I think of Sam’s writing but my blurb on the book I think says it all:

“Sam Pink exists in all things. Sam Pink’s tremor is threaded through the dark sections of scenes in the first Back to the Future, the sections we generally think of as ‘night.’ Sam Pink gored his way to the center of the child Russell Edson and ate all the beautiful / smart / wicked / fucked / riotous / smarmy / unconditional parts about him, then went to incubate and redouble. Sam Pink absorbed the passing souls of Andy Kaufman, Anton LaVey, Klaus Kinski and Shel Silverstein and fried them in his mother’s blood. When Sam Pink emerged he wasn’t crying, but everyone in the hospital was, tears of whiskey, liquid gold and smegma, and within seconds of his first breath, all our Bibles were ripped in half, prefiguring this book here, this tumor, this thing that should not have a name. It is no exaggeration to say now, with a mouth full of blood, that Sam Pink is dire, is hilarious, is chewing up our future.”

The cover itself is worth jacking off on. As is the title of the book: I AM GOING TO CLONE MYSELF THEN KILL THE CLONE AND EAT IT.

He is also a bastard, don’t you like bastards?