The Monotony of Work: Justin Sirois

Do you know this guy? Ace Justin Sirois has an app. Who the fuck has their own app?!! Check it out. 4.99 never seemed so attractive. What can you get for 4.99? Not a pack of smokes, but you can get this app. Booms. 10. Guy needs a change in his life, enter friend who founded the escapism game, which btw is an app specifically for an iPhone is how you sign up for it. END_OF_DOCUMENT_TOKEN_TO_BE_REPLACED 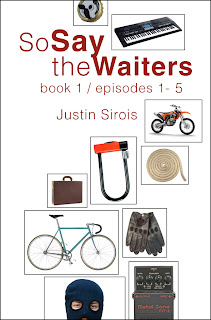 Which is meant to confess two things: one, Justin is my friend. Two, my man knows party fowl. END_OF_DOCUMENT_TOKEN_TO_BE_REPLACED Listen to a story today at noon

If you go here today at noon (EST, 25 minutes from right . . . now) you will be able to listen to The Signal, which is a really cool radio program hosted by my friend Aaron Henkin (an excellent poker player, great radio voice). On the program you will be able to hear my other friend Justin Sirois (terrible poker player, terrible radio voice, awesome writer) read from MLKNG SCKLS, his book about Iraq, as well as some other good literary thingses.