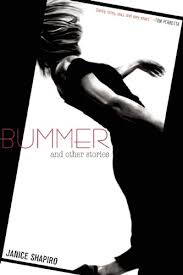 END_OF_DOCUMENT_TOKEN_TO_BE_REPLACED

Comments Off on BUMMER and other stories, by Janice Shapiro
November 2nd, 2010 / 11:06 am
Alex Kalamaroff

The Joys of Oral History

Life is not organized, logical, or factually accurate. Yet we require this of our history books, which must contain names, dates, verifiable pieces of evidence, and claims about cause-and-effect. Event A leads to Event B. Event C happened on December 15th, 1910. Person X was at Place Y During The Conflict of Z. It can all get rather drab and unrealistic. There is something particularly dulling about reading a list of dates and proper nouns and thinking these alone compose our lives. Where’s the hilarity, hurt, daily bafflement, and sense of fun? History books miss out on a lot, particularly the general pell-mell-ness that pervades life, where cause-and-effect is displaced by the indecipherable and happenstance forces that influence our actions and beliefs. This is why oral histories rule.

Oral histories are collections of voices all jousting to be heard. Whether they’re about a life, an era, or a single event, oral histories convey the necessary complexity, where details collide and thesis statements don’t matter. They are messy, chaotic, and incongruent—patchwork quilts of anecdotes, recollections, non-sequitors, and stories that begin with a promise but don’t really end, stories filled with incorrect information, nostalgia for even the worst events, positive memories of mean people, and much more, stories stuffed with dreams, debris, and insignificant moments—the true fabric of the history.

Please Kill Me: The Uncensored Oral History of Punk, by Legs McNeil and Gillian McCain

Please Kill Me is a wicked traipse through the gutter-glamour of ’70s New York. There’s Iggy Pop, Patti Smith, Handsome Dick Manitoba, Jayne (né Wayne) County, and the Ramones, plus a whole slue of record industry insiders, drug addicts, scenesters and weirdoes. The music is great and the talk uproarious. From tales of Jim Morrison’s depravity to anecdotes about those doomed birds Sid and Nancy, there is something for everyone in Please Kill Me. “There was never a yesterday or a tomorrow,” says one punk rocker. Only an insane today. This book is funny, gross, and outrageous, an underground oral history that is a riot of voices.

END_OF_DOCUMENT_TOKEN_TO_BE_REPLACED

At Mother Jones, a primer on how to start your own country. I had no idea micronations existed. They seem similar to micropresses.

Aubrey Hirsch has some advice on what you can do with your novella. (No, not that.)

Why do writers abandon their novels? It’s a good question.

It is time for the Tournament of Books. Who are your favorites? I am rooting for Bad Marie.

Speaking of ladies, I Don’t Respect Female Expression, a chapbook of 11 stories by Frank Hinton, will be out at the end of April.

Joel Johnson wrote an article for Wired about Foxconn, iPhones, and the suicides of 17 employees.

Here’s a list of words that don’t exist in English and here is a similar list. (Thanks, Fiction Writers Review)

Kelly Davio offers some thoughts on writers and self-presentation.

The Wall Street Journal is doing such great literary coverage these days. Meghan O’Rourke writes about cadence in prose.

Tentacles Are Hair You Wear On Your Spleen, Ideally

“You might define the general trend in my work as a synthesis of aesthetics and psychology. Traditionally, in Japan, these are not two different things. Neither is aesthetics in conflict with realism. I believe this is unique to Japan.” – Yukio Mishima

END_OF_DOCUMENT_TOKEN_TO_BE_REPLACED CAConrad, the poet of the year if ever there were one (when’s the last time anyone had books as good as Advanced Elvis Course and The Book of Frank come out in the same year?), has an anecdote about the most memorable line from the 2005 reading in the comments section of this to-be-revisited list. Can anyone give us some highlights from yesterday’s event? Will anything else in 2010 approach this gathering in sheer skylight? END_OF_DOCUMENT_TOKEN_TO_BE_REPLACED

Those who suffer from random ballads, unrequited ampersand love, sleepwalking in the Donut factory, the need to starve all rabbits to death because you love them like that, a strange anxiety that you are the only one in the world who can’t tell carob apart from chocolate, supplication, irresponsibility, petty secrecy, a reflex by which you clutch epically at whatever night will have you, a bunch of good ideas that you prevent yourself from undertaking because you spend too much time doing laundry, pointed coughs, a whole credit card for the purchase of sunglasses, pony love, pool love, pockmark love, and/or if you are really a spear, a blizzard, or a downfall, and you’ve been faking it through hopskotch and teller interaction this whole time, you will want to click and sink into notnostrums* 3, the new issue of online poetry edited by Guy Petit and Luke Bloomfield. Be sure to gawk the trailer for notnostrums’ upcoming poetry movie If You Think Of It. Roster after the jump. Maybe get some water too.