10. Christian allows the the I of the book to give us a stream of people, mothers and friends and farmers and writers and cousins and peopleIhavenoideawhotheyare hovering in the planet Virginia, that glow PHENOMENAL on the elastic floors of the poems. Where Christian deviates from Salamun lies within the urgency of the tone deployed by the narrating voice. Salamun’s I, in On the Tracks of Wild Game, gives us a dizzy hula hooping afflicted with hives. The voice of Christian’s I exudes a tone that is steadier and absorbent, though perhaps no more or less reliable. “The city came by for the trash. / I found a science of imaginary solutions, which was a good thing” (Responsibility). It is not a voice indifferent to being caught in an orbit of people and place with a poetic tongue, but it accepts or replicates the rhythms and paces of the persistent oscillation orbits have as a way of engaging with observation that pulls the I closer, than backs it away. The steadiness allows the illogical to leak in, to rub, but not roughly. It becomes part of the system, how it perpetuates, but re-forms it into a system that can be unpredictable. END_OF_DOCUMENT_TOKEN_TO_BE_REPLACED

“We had the feeling of a new morning / with the lights off.” 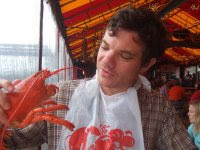 Looking for tic-tac-toe with yourself? When you are not even sure you have a self, when it feels more like a rumor shivering in a cathedral? Then hustle like a clod. Keep the night like an arm-around. And check out your new favorite poet, Jack Christian, who paints his boats to display the night and take you to it. He is all over the internet: featured at Ink Node, live at Sixth Finch, Thermos, and Gregory Lawless’s blog I Thought I Was New Here. He’s a poet of the fairgrounds, the airport, and the goodbye-for-real. I think his poem “I Am Yours” from Sixth Finch is my favorite of this web blitz, because it is true in the way that true-making is the only way true happens.